“I really do appreciate all the financial assistance that West Alabama has given me,” Nelson said. “I think the biggest factor for me for choosing between the schools especially was because West Alabama’s team was just so accepting. They really did just accept me and made me feel like I was at home.”

Nelson also said the terrain at West Alabama made an influence on his decision between deciding between West Alabama, Birmingham Southern, and West Florida.

“The terrain at Birmingham Southern, it was a beautiful school but right around it, there was not a lot of running room and they had to bus their people out there,” Nelson said. “Where for West Alabama, it is just rolling green hills which is the best for cross country.”

“It helps to know where I am going and I don’t have to worry about that anymore,” Nelson said with a chuckle.

“Brandon has been an awesome inspiration to the rest of the team for the past few years,” Atkinson said. “He has gone above and beyond the call of duty. He has been a tremendous runner for us and he improved each year. He was a great role model for our younger runners and has just done an outstanding job for us.

“We really appreciate his dedication to the sport and his passion and it has paid off in him getting a scholarship. I am really proud of him.”

“He is an excellent prospect and we feel very fortunate to have him choose the University of West Alabama as the place to continue his education and his running career,” Medeiros said. “His success in high school shows he has the ability to become an outstanding student as well as a very productive collegiate runner. We think he can definitely become an all-conference runner for us. I also like his down-to-earth attitude and his love for running.

“We think he will be an excellent teammate to our other runners. His kind of attitude can be contagious and help motivate other runners as well as pushing himself to excel.  Like I said before, we are excited to have Brandon join us at UWA.”

Nelson was named most valuable runner in boys cross country and track this past spring sports banquet for T.R. Miller.

He is the fifth Tiger athlete to sign a scholarship during the 2009-2010 school year and seventh athlete overall between W.S. Neal and T.R. Miller. 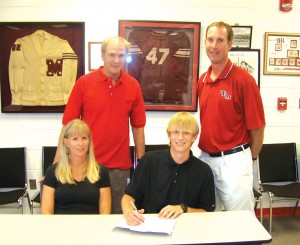