The 6-3, 240 pound tight end said he started college shortly after graduating high school and will be a junior this season and major in criminal justice.

“Sports have been going great for me and it has taught me a lot of things I can apply to life,” Howard said. “I came to Jacksonville State because I love the atmosphere and the people. They are very friendly much like in my hometown of Brewton.

“They are very loving and welcoming here.”

After red shirting his freshman season in 2007, Howard made his debut as a Gamecock in 2008 and saw action in 10 games. He finished 2008 with three receptions for 22 yards and finished the season with 16 knockdowns and three pancake blocks.

This past 2009 season, Howard had 15 catches for a total of 148 yards and four touchdowns.

Howard played for former W.S. Neal head coach Blaine Hathcock and was a four-year letterman and helped lead the Eagles to a 10-3 record as a senior.

“My favorite memory was during my senior season at Neal when we defeated T.R. Miller after we had lost to them previously 10 years in a row,” Howard said. “It was amazing how we were down 21-0 at the half and even when our fans started leaving at the half we overcame all of the adversity and defeated Miller 42-35 even against all the odds.”

“Everyone has to be bought in to create a good product,” Howard said. “It is definitely more serious.”

At JSU, Howard joins former Eagle Cory Freeman and for the 2010 football season, recent W.S. Neal graduate Jeremy Nicholson will join the team. He says the advice he would give Nicholson and any high school player wanting to play in college would be to stay on their academics.

“It is going to be a fun experience to play with Jeremy this year and I will enjoy showing him the ropes,” Howard said. “It is also going to be fun playing with a guy from my neighborhood, being that he is my high school quarterback’s brother.

Howard, the son of Shannon Howard and Jeffrey Hall, has two years left to play at JSU and after college he plans to use his degree that earned and become a very successful businessman. 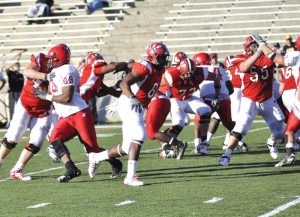