After falling to Escambia County in their first game Saturday and dropping to the losers bracket, Brewton’s 9-10 Little League all stars had to hold on for dear life against Evergreen Sunday as they earned a 13-12 win and lived to play again.

The win for Brewton eliminated Evergreen and advanced Brewton to play Opp Monday night in the losers bracket with the winner advancing to play Escambia County in the championship game Tuesday.

In the game Sunday, Brewton lead 2-0 after the top of the first inning only to see Evergreen take a 3-2 lead after scoring three runs in the bottom of the inning.

In the top of the second, Brewton batted around and scored seven runs to build a 9-3 and held a 9-4 lead after two innings.

In the top of the fifth inning, Brewton regained the lead with one run in the inning only to see Evergreen rally with two of their own to hold an 11-10 lead heading into the top of the sixth.

Needing one run to extend the game and their tournament life, Brewton scored three runs in the sixth inning to grab a 13-11 lead.

With Evergreen left to bat in the bottom of the sixth inning, they scored one run to cut the lead to 13-12 and left runners on second and third base as Brewton won by one run.

Hayden Atkinson earned the win in relief for Brewton. Atkinson, one of five Brewton pitchers in the game, went the final 1 2/3 innings to get the win.

At bat for Brewton, Micah Flores was 1-for-4 and Blair was 3-for-3 with a triple and five RBIs.

Russell Smith was 1-for-3 with a triple and two RBIs and Andrew Etheridge was 1-for-5 with one RBI.

Pope was 1-for-4 with a double and one RBI and Bradford was 1-for-1 with one RBI.

Mike Wade served as manager and Roberto Flores served as coach along with Randy Bradford assisting.

Brewton’s 11- and12-year-old All Star team will begin play in their tournament this Saturday in Opp.

The team will begin play in their district tournament on Saturday, July 3, in Opp at 8 p.m. against Opp.

Other teams in the tournament are Evergreen and Escambia County.

Robbie Floyd will serve as manager and Lew Najor will be the coach. 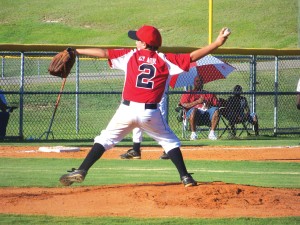 Adam Robinson | The Brewton Standard Brewton Little League 9- and 10-year-old All Star Daniel Blair, above, pitches against Evergreen Sunday afternoon in Brewton. Brewton defeated Evergreen 13-12 in the elimination game to stay alive and advance to play Opp on Monday. Opp defeated Brewton 13-4 Monday to eliminate them from tournament play.