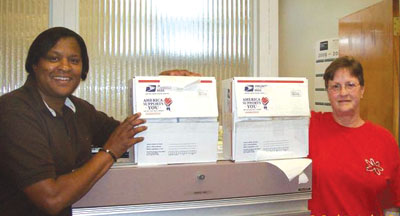 In July 2009 a group of residents began asking others to come forward with supplies to fill “goody boxes” for military men and women involved in the war in Afghanistan and Iraq. The response was good, so good that this year the same group is asking for names of people who might be able to receive the boxes.

Rhonda Bailey recently produced a total of eight boxes to employees at the Escambia County Courthouse who spearheaded an effort to provide the boxes for military personnel.

“Rhonda has given us four male boxes and four female boxes to send to the troops in Iraq and Afghanistan,” Redfearn said. “We want to see that these boxes get to our people who are serving there.”

Redfearn and her co-workers began a crusade last year to help gather supplies for soldiers. The effort allowed the group to furnish several boxes to military men and women stationed in war zones in multiple locations, Redfearn said.

The care packages have multiplied and Redfearn said her group is anxious to supply these boxes to friends and family members of Brewton area residents.

Care packages containing items like hard candies, cotton swabs, nail clippers and other personal care items can be sent to many military posts around the world.

If you are interested in contributing to make the care packages possible, or if you know a soldier who would benefit from the care packages, call Redfearn at 867-9168 or drop by her office downstairs in Room 115 at the Escambia County Courthouse on Belleville Avenue.