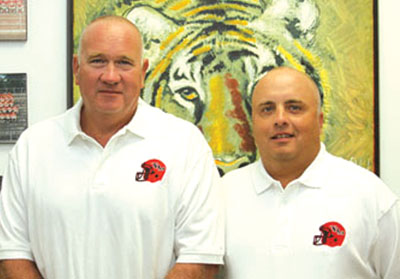 Also with the new radio station, the radio booth for the Tigers will see two new faces.

Bill Henderson and David Jennings will take over in the radio booth this season for the Tigers.

“We are excited about this and what they can bring to us and we have two new broadcasters this year as we will bring back Bill Henderson who has done this for us in the past,” Riggs said in a recent interview on Tiger Website www.millerfootball.com. “Bill played at the University of Alabama and his son Phillip was an outstanding player for us back in the 90s. Bill has done some work for us before and we are excited to get him back with is.”

Jennings, a former player in the mid-80s for the Tigers, will also bring some excitement for T.R. Miller radio listeners.

“They are very enthusiastic about this and I know they are going to do a great job for us,” Riggs said. “We are excited about the radio this year. We will be going coaches shows and other things during the season that we think will make the 2010 T.R. Miller season fun and exciting. So we hope fans will tune in for us.”