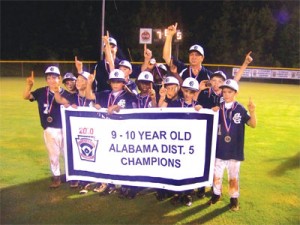 Adam Robinson | The Brewton Standard The Escambia County 9- and 10-year-old Little League All Star captured the Alabama District 5 championship Thursday in Brewton when they defeated Opp 7-5. Escambia County will now advance to the state tournament in Jackson.

After clinching their first ever Little League district championship last year, East Brewton, along with Flomaton Little League, clinched their second title Thursday night in Brewton when the 9-10 Escambia County Little League All Star team defeated Opp 7-5 for the championship.

Escambia County, which is made up of the combination of East Brewton and Flomaton League players, finished the tournament with an overall record of 3-1 to take the championship.

“It feels great to be district champions,” Escambia County manager Wayne Hammac said. “This is my first year doing this and being a district champion and it brought tears to my eyes to see how well they played and brought it all together. With the bases loaded, I brought a young guy in and he (Cole Brown) is a really good ballplayer. But Matt (Hutchins) pitched excellent and it feels good to me and now I am going to state and it feels better. I just hope we can just raise enough money so everyone can stay and we can have a good time and come back winners on that.”

Prior to Thursday night’s game, Escambia County and Opp had played each other twice.

Escambia County took game one over Opp Sunday with a spectacular 8-2 rally in the top of the sixth with two outs to win 12-9 in seven innings.

Tuesday, the two teams met again in the first game of the championship series. Opp handed Escambia their first loss of the tournament by a score of 10-9 to play the “if needed” game Wednesday, but not without Escambia making another rally in the sixth inning to tie the game at 9-9 only to lose in the bottom of the sixth inning.

After Wednesday’s game was rained out and moved to Thursday, Escambia County was the visiting team and led late in the game with Opp being the team doing the rallying.

Escambia County led 7-1 heading into the bottom of the sixth inning before Opp scored four runs to cut the lead to 7-5 with the bases loaded and two outs.

Before Opp scored their fifth and final run of the game, Escambia County was thought to have won the game by a score of 7-4, but a bases loaded catcher’s interference call came late with EC celebrating on the field to load the bases again for Opp with the lead cut to two.

After a passed ball, Opp tried to cut the lead even closer, but was caught stealing at home to end the game with Escambia County winning by two runs.

“We executed on our hits and we got down to the last there at the end of the game and I kind of did not like the call there at the last (catcher interference call that extended the game and cut the lead to 7-5). I thought we had won it but the umpire called a tip,” Hammac said. “But other than that, I thought the guys played hard and we hit the ball well and scored runs. Matt pitched an excellent game. I don’t think he walked many and other than that he did good.

“I am really proud of him and I told the guys that if you get out there and play your hardest and play the best ball you can, we will come out and be winners and that is what happened. I know I am proud of them.”

“Before every game we pray and as God to help us and to play with good sportsmanship, and that is what he did. If you put him first in your life, everything will work out. That is what happened.”

After a pitching duel early that saw no runs through three complete innings, Escambia County scored three in the fourth inning to hold a 3-0 lead and added three more in the fifth to hold a 6-0 lead.

Opp cut the lead to 6-1 in the bottom of the fifth only to see Escambia County take the run back with one of their own to hold a 7-1 lead heading into bottom of the sixth inning.

Opp scored four runs in the bottom of the inning.

Opp pitchers walked 14 Escambia County hitters in the game and hit two in the loss while striking out eight and surrendering three hits.

Opp made no errors in the loss while Escambia County made two, but left six runners on base while EC left two.

Matt Hutchins earned the win on the mound for Escambia while Cole Brown earned the save.

Brown went the final 1/3 inning allowing no runs, no hits, and walked two.

At the plate for Escambia County, Hutchins was 2-for-2 with a double and two RBIs. Aaron Bosarge was 1-for-2 with one RBI.

Escambia County will now go to the state tournament in Jackson that is set to begin Saturday, July 10.

Hammac and Mike Brown were coaches on the team.