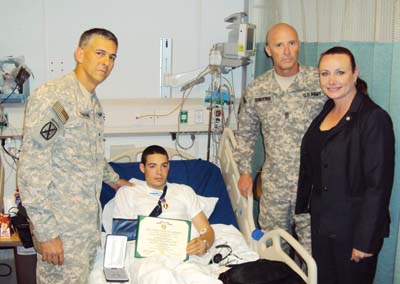 U.S. Army PFC Dakota Wade Madison was one of many serving his country overseas last weekend fighting for the freedoms that enable Americans to enjoy the Fourth of July holiday.

For Madison, his experience last weekend will bring new meaning to Independence Day.

While many enjoyed barbecue, swimming and fireworks, the 18-year-old Atmore resident was recovering from surgery in an Afghanistan hospital after being injured when the unit he serves in came under heavy mortar fire injuring five soldiers including him. For his service to his country, Madison was awarded the Purple Heart, the oldest award given to members of the U.S. military to those who have been wounded or killed while serving, while still in his hospital bed.

Friday, Madison was back on American soil at Fort Campbell, Ky. where he is assigned to the 1-327 Infantry Regiment, 101st Airborne Division (Air Assault) awaiting notice if he would receive 15-day convalescent leave to travel back to Atmore to be with family and friends. Although in pain, Madison was in good spirits.

“I didn’t expect this,” he said. “I’m doing pretty good though.”

Madison said his unit had just returned to the Konar Province in Afghanistan and was preparing for another mission as part of Operation Enduring Freedom on July 3 when the attack occurred.

“All of a sudden I heard a boom and then there was a second boom that I didn’t hear, I just felt the heat,” he said. “It was already 140 degrees, so when I felt more heat, I knew it wasn’t good. All I remember was heat and smacking the side of truck. It was so hot it melted my boots.”

Following the attack, Madison said he carried one of his fellow soldiers injured in the attack over his shoulder to the aid station. It was not until then that he realized he had also been injured.

“I didn’t even feel it because I carried one of the guys with me about 200 yards to the aid station,” Madison said. “When I got him there, they said both of my arms were bleeding.”

“I don’t know if I lost consciousness from the blood loss or the pain,” he said.

Madison’s mother, Wendy, received a call around 2:30 p.m. on July 3 from the Department of the Army informing her that her son had been injured. She said as soon as she learned it was the Army calling, her emotions took over.

“I work nights, so they woke me up out of a dead sleep,” she said. “When they said who they were, I said ‘Oh my God,’ and I lost it. All they told me is that he had an injury to the shoulder and that this information was 18 hours old. I flooded them with questions, but they couldn’t answer them. They called me five hours later and told me he was out of surgery and stable and would be en route to Germany soon.”

As a result of the attack, the radial nerve and tricep muscle in Madison’s right arm was severed. He also suffered severe vertebrae bruising and a minor traumatic brain injury.

Madison said he knew he could feel pain in his arm on the way to the aid station but thought it was his fellow soldier encouraging him to run faster.

“I thought he had just punched me telling me to run faster because we were running to the truck to get in it. It’s a lot safer inside there and there was a 50-caliber machine gun on it as well,” he said.

Doctors at a hospital in Afghanistan performed surgery to remove the shrapnel, which was lodged in between Madison’s shoulder joint. He received his purple heart following the surgery.

“It’s not one of those awards you really want, but it’s a perk getting it,” he said. “You don’t want to get shot or blown up, but at least they award you for it.”

The soldier’s radial nerve and tricep were reattached during surgery in Germany the following day. He was then flown to Walter Reed Army Medical Center in Washington, D.C. before returning to Fort Campbell on Wednesday for recovery.

“I’m getting more and more movement in my arm each day,” Madison said.

Madison said as soon as he was able to, he called his mother to set her mind at ease.

“As soon as I got a chance, I called her, but she said they had already called her,” he said.

That phone call came on the Fourth of July and will be one that Wendy Madison will never forget. However, she takes pride in her son’s serves to his country.

“I’m proud but that phone call last Saturday was my worse nightmare,” she said Friday via cell phone as she traveled to Fort Campbell to see her son.

Madison joined the Army two months after his 17th birthday after taking the GED in order to receive early admission, something his mother said he has always wanted to do. He has been in Afghanistan since May.

“He was just ready to get a jump start,” she said.

As for Madison’s future in the Army, he hopes his injury does not prevent him from doing what he loves.

“Right now, I’m looking to stay in, but I’m probably going to change my job to a combat medic,” he said.

During the attack, no soldiers were killed.