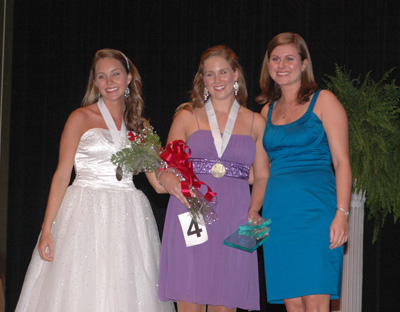 Six young women were vying for the title of Escambia County Junior Miss Saturday night on the campus of Jefferson Davis Community College in Brewton with an Excel High School student walking away with the Junior Miss medal.

The competition for Junior Miss was filled with smiles and routines that gave the crowd the hard work that each contestant and their little sister had put in during the last month.

After performing the opening number, the contestants took part in the fitness routine followed by the self-expression portion of the program and ended the night with their talent.

When all was said and done the judges returned from their deliberations, Shelly Womack was crowned as the 2011 Escambia County Junior Miss.

Womack, the daughter of David and Janet Womack and a student at Excel High School, will be representing Escambia County for the next year as its Junior Miss as well as at the state competition in Montgomery in January of 2011.

Womack said it winning Junior Miss was an incredible feeling with great opportunities.

“It’s absolutely amazing and life changing,” Womack said. “I know this experience is going to change my life for the better.”

Despite winning the honor, Womack said she was shocked to win because of the caliber of competition she was up against.

“I was very surprised when they called my name,” Womack said. “There are so many incredible girls that were on this stage with me tonight, so it was really shocking that I was chosen.”

Before Womack’s name was called as Junior Miss, Cierra White of Flomaton was selected as the first alternate and Walton Nichols of Atmore as the second alternate.

Now that she is Escambia County’s Junior Miss, Womack will be thrust into a nonstop world with interview and talent coaches as well as appearances.

Womack said she thinks her experience over the course of the next year will be rewarding for her character.

“This is going to be something that helps me better myself,” Womack said. “Being Junior Miss is about being healthy and doing the right things. I hope to take away all of those characteristics.”