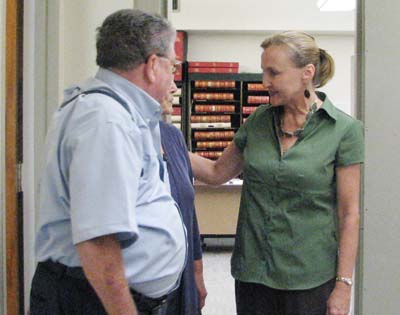 Escambia County is guaranteed at least one woman on the school board next year.

Republican Robert Bentley, a Tuscaloosa physician and state legislator, won his party’s nomination in a race marked by the allegations that part of Bentley’s support came from crossover Democratic votes. Opponent Bradley Byrne charged that the Alabama Education Association was behind attacks on his campaign.

In the school board race, Agerton will now face Republican Cindy Jackson in the November general election.

“Wow, I am so happy,” Agerton said at the courthouse Tuesday night. “I have so many people to thank. So many people have helped me — family, former students.”

Brantley said he would continue to support county schools, where he has spent many hours volunteering.

There is a chance for one more woman to win a seat on the school board. Republican Sherry Digmon will face incumbent Democrat Cereal Daniel in district 6.

In statewide races, James Anderson won the Democratic nomination for attorney general. He will face Luther Strange in November.

Escambia County Probate Judge Emilie Mims said there were no problems during the runoff voting.

“Things went very well,” she said, “other than the low turnout.”