After splitting a doubleheader Friday in Brewton against Atmore, the Brewton Babe Ruth 13-year-old All Stars lost a deciding game three Saturday to finish as runner-up in district play.

In the best two-of-three game series, Brewton defeated Atmore 5-3 in game one in Brewton before falling 8-5 in the second game Friday night.

After having Friday’s game end around midnight, the teams played a deciding game Saturday at 11 a.m. and went into extra innings with Brewton losing 5-1 in eight innings.

In game one, Brewton scored three runs in the bottom of the fourth to aid the win.

Brewton held a 1-0 lead after the second inning before Atmore tied the game at 1-1 with one run in the top of the third.

From there, Brewton’s three runs in the fourth inning gave them a 4-1. Atmore cut the lead to 4-2 in the top of the fifth inning and Brewton added a run to hold a 5-2 lead after the fifth inning.

Atmore scored one run in the top of the seventh but Brewton was able to hang on for the win, 5-3.

Tyler Jordan earned the win on the mound for Brewton, with a complete game, allowing three runs, two earned, three hits and striking out six, and walking two.

Quantae Barksdale was 1-for-4 at the plate and Chris Jones was 1-for-3 along with Mike Williams, and Jones Manning.

After having to wait for power to be restored to a section of lights near third base, game two got under way late with Atmore claiming an 8-5 win over Brewton and forcing an extra game.

Atmore used a three-run sixth inning to take an 8-4 lead over Brewton to get the win.

Brewton would cut the score to 8-5 in the top of the seventh and leave one runner on base as they lost by three.

Both teams scored one run each in the first inning before Atmore used a four-run third inning to take a 5-1 lead into the top of the fourth.

Brewton would cut the lead to 5-3 with two runs in the inning and 5-4 with one run in the fifth before Atmore’s three runs in the sixth inning.

Brewton used five pitchers in the loss with Miles Powell taking the loss in relief of starter James Peach.

Brewton’s pitchers allowed four hits in the loss and walked 11.

Barksdale was 2-for-5 with a triple and one RBI and Tyler Joyner was 1-for-4.

Keaton Parker was 2-for-2 and Nick Laster was 1-for-3 with two RBIs.

Both teams left 10 runners on base and both made four errors.

In the deciding game three Saturday morning, and the winner advancing to the state tournament, it looked as if Brewton would claim a 1-0 pitcher’s duel winning through five innings of play.

Holding a 1-0 lead heading into the top of the sixth inning, Atmore tied the game at 1-1 and forced extra innings before getting four runs in the top of the eighth to down Brewton 5-1.

Brewton was held to only three hits in the game while Atmore had six.

Tyler Joyner got the start on the mound and the no decision as he went seven innings and allowed four hits, one run, walked one, hit one, and struck out eight.

Brewton used three pitchers in the top of the eighth inning in Rob Jones, Jones Manning, and Powell with Jones taking the loss.

Each pitcher went 1/3 of an inning with Jones allowing one hit, one run, and walked one.

Manning allowed three runs and walked and hit one and Powell allowed one hit.

In the top of the eighth, Atmore had two hits (a single and a three-run double), a sacrifice, two walks, a fielder’s choice and a hit-by-pitch.

Coaching the all stars were David Jennings, head coach, and Howard Joyner and Robert Jones assisting. 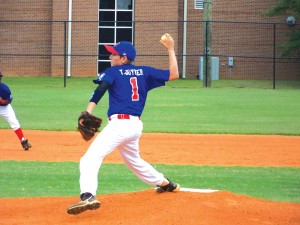