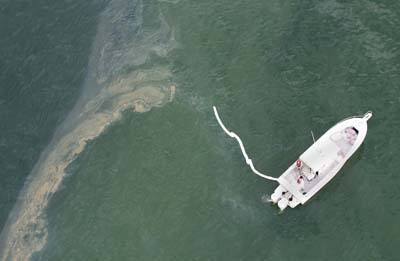 A boat trailing boom tries to absorb some of the oil in the Gulf of Mexico near Gulf Shores Thursday. Photo by Ashley Vansant.

Off the coast of Gulf Shores Thursday, more oil — both a light sheen and darker patches of fresher oil — were encroaching the beach for the first time in days, even as vacationers continued to enjoy the summer sun.

But there was good news Thursday afternoon: For the first time since April, BP officials announced oil had stopped flowing from the underwater well that was damaged in an explosion three months ago. A new cap over the leak was still being tested late Thursday.

“We’re encouraged by this development, but this isn’t over,” incident commander Adm. Thad Allen said in a statement. “Over the next several hours we will continue to collect data and work with the federal science team to analyze this information and perform additional seismic mapping runs in the hopes of gaining a better understanding on the condition of the well bore and options for temporary shut in of the well during a hurricane. It remains likely that we will return to the containment process using this new stacking cap connected to the risers to attempt to collect up to 80,000 barrels of oil per day until the relief well is completed.”

On a reconnaissance mission along the coast Thursday, National Guard and Coast Guard officials spotted oil sheen and other patches of oil — some already reddened by dispersants — near Gulf Shores. They alerted officials on the ground, who quickly directed oil recovery vessels to the sites. Those boats — called Vessels of Opportunity by the Coast Guard — are often fishing boats in need of other work because of the oil spill. Working often in pairs, they drag boom through the oil to try to absorb and contain it.

Coast Guard Third Class Petty Officer Will Jones, a spotter on Thursday’s flight, said he had not seen that much oil in several days. “I’ve been up here a total 30 hours so far” over multiple missions, he said. “I haven’t seen anything this bad.”