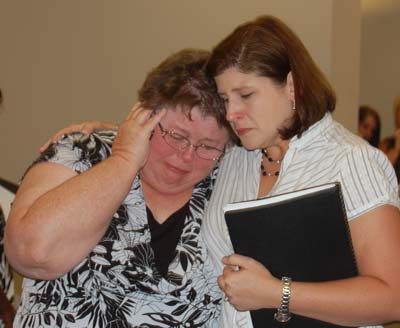 MONTGOMERY — Stephanie King may have been first on the minds of family members gathered for a parole hearing for her killer Tuesday, but there were also other innocents in their hearts: the niece and nephew she never knew, and the children she will never have.
After emotional appeals from the King family and from local law enforcement, the state Board of Pardons and Paroles denied parole for King’s killer Edward Russell Dubose. He will remain in prison for at least five more years.
“My heart’s desire is that this doesn’t happen to anyone else,” Stephanie’s mother Sally said after the hearing. “I miss her so much. After the grandbabies got here, I missed the children she will never have.”
Dubose was convicted of the 1988 murder of King, who was abducted from Alco Baptist Church while she was cleaning, raped and then strangled. He was later granted an appeal and pleaded guilty in 1997, just before his new trial, to avoid the death penalty. His life sentence allows him the opportunity to seek parole.
Dubose attorney Seth Tucker argued that his client has “made a concerted effort to make himself a better person,” including taking several classes offered to inmates.
“He has become a leader in prison,” Tucker said. “He has earned the respect of other prisoners. He helps some of the younger inmates … to become better people. He really has succeeded in prison.”
But District Attorney Steve Billy, who was an assistant in the office when Dubose pleaded guilty in 1997, said no one can know whether Dubose is truly rehabilitated and argued he should be.
“Her life and her opportunities ended that day,” Billy said of King. “She didn’t have a chance. She didn’t have courses she could take.
“There is no rehabilitation for losing a child.”
Billy said he believed Dubose felt “entitled.”
“He worked for an elite family in Brewton,” Billy said. “I don’t think he thought he would be held accountable.”
Escambia County Sheriff Grover Smith, who was Brewton’s police chief at the time of King’s murder, said he had known Dubose even before the murder. Dubose had been convicted of burglary and received probation.
“I had never seen anything from Russell that would make me think he could do something like that,” Smith said of the murder. “At the trial, he smiled throughout. He never seemed to be bothered or concerned. I don’t know how anyone can reach into his mind” and know he would not do something like that again.
Smith pointed out that Dubose made King drive three miles after he raped her.
“He had plenty of time for reason to assert itself,” Smith said.
State Rep. Alan Baker, who was King’s American history teacher at T.R. Miller High School, could not hold back tears as he recalled her murder.
“I see how her former classmates have grown into adults,” he said. “I cannot comprehend the evil that exists in a person that would allow such things.”
Two of Dubose’s cousins argued that he would have a network of relatives who could find him work and housing if he were released.
“Russell has served as a model prisoner,” cousin Sam Odom, a U.S. Army captain, said. “He has several support systems in place willing to embrace him.”
Attorney General Troy King said the parole hearing was not about “the man Dubose has become, but the kind of man he was.”
“There is no testimony as powerful as the testimony rolling down the cheeks of those in this room,” King said, referring to Stephanie King’s family members and friends.
Many of those tears were shed as a letter from Stephanie King’s sister Amanda was read by family friend Jill Edwards.
“I am now a mother,” Amanda wrote. “I want you to hear a new voice, two voices, two small innocent voices. There’s a fear that resides deep inside every mother, the fear that you will lose a child. The pain my mother must have felt for my sister seems unbearable.”
Amanda wrote that her children only know their Aunt Stephanie through photos and recall her as a “special angel in heaven.”
“I’m doing everything I can to protect my children’s innocence,” Amanda wrote. “I feel like my childhood was taken away. … I want you to imagine my sweet innocent babies, imagine how hard it will be for them to find out what happened to Stephanie, and how much harder it would be for them to find out he is free.”
The parole board took just moments after the testimony Tuesday to rule that Dubose will not be eligible for release for another five years.
Sally King said she was “so thankful and grateful” for the outcome.
King said her husband, Ray, reminded her recently, “He actually did get a parole hearing in 1997 when he pled and he got life.”
“I know the only answer (Tuesday) came from the dear Lord above,” King said. “God forgives everything we do, if we ask him. But we have to ask him. When we do things wrong, there is punishment.”
King said her grandson’s favorite place to hide things is behind his aunt Stephanie’s picture, and that both grandchildren think of their aunt in heaven.
“She’s up there, playing the organ and barefoot as a jaybird,” King said.