From dressing up as a coach on dress up days and career days at a young age, to starting a successful business, Mikel Riggs has established a name for himself.

Mikel, a 2006 graduate of T.R. Miller, started off freshman year of college at Huntingdon playing football but only stayed one semester.

“I came home to JDCC for a year and helped coach the fall of 2007 (at T.R. Miller),” Riggs said. “In the spring of 2008, I went to Auburn and am currently pursuing a degree in physical education. I have one more semester of classes (this fall) then I will intern in the spring and should be graduating in spring of 2011.”

While at Auburn, Riggs began work as a student videographer.

“That is my official title, but I have done a little of it all,” Riggs said. “I have made weekly highlight videos for the team to watch on a Thursday night prior to the game of the last week’s plays. I have created camp videos for recruits to watch as well as the video that the coaches take into a player’s home when they recruit them to show off our “family”. I have also created the “Beat Bama” pump up videos the past two years, which I must say have been my best two works. Both Tubbs (former Auburn coach Tommy Tuberville) and Chiz (current coach Gene Chizik) went crazy over them. So that is an example of some of the things I have created. I also video practice, cut up practice, game film and recruiting film.”

Riggs said a normal day for him in the fall will be class from 7:30 a.m. to 1 p.m., an hour to grab lunch, then back to athletic complex for football practice at 2 p.m. to set up then practice officially starts at 3 p.m.

“After practice we have to bring in the film on the computers and upload it to the network so the coaches can watch practice immediately after it and I am usually out of there between 6 and 7 p.m.,” Riggs said. “On game day we usually get to the stadium about four hours before the game and get our stuff set up. During the actual game I do not video, I take the footage that others have shot and bring it into the computer and clean it up and piece it together so when we get back to the complex all we have to do it upload it to server and now the coaches have it. On road games I do the same thing except the “video guys” will help the managers and trainers unload the truck and set up the sideline then we get to pack it all back away which makes for some long road trips at times, but it is all fun to be apart of. Working for Auburn University has been a great experience for me. I have met a lot of great people who truly care for the university and what it stands for.”

“Dads rule for highlight videos was that if we made it to the state championship game he would have one made, win or lose, and sometimes he would do semi-finals,” Mikel said. “Well the thought of creating one never caught my eye until I got a package in the mail one day from Pat Byrne. He had created one from footage of his senior year because my dad never had one made. He did an excellent job and sent them out to some of his classmates and it was a big hit. I thought if Pat could do one then certainly I could. So it all started my junior year of high school in 2004.”

From there, Riggs started his own business—109 Productions.  In case you are wondering where the “109” came from, it is where it all originated: Mikel’s home at 109 James Street over six years ago.

“My business actually got started in January of 2010,” Riggs said. “My business partner, Justin Lambert. A 2002 T.R. Miller graduate, had been bugging me for about a year about getting together and getting official with my business. So after a year of nagging he still would not leave me alone about how good he thought a business would be if we could utilize my computer talent the right way. So in December of 2009 I got my investor to give me some money to get started and by January of this year 109 Productions LLC was created.”

Riggs said his actual business started out as highlight videos, but over the years have been asked to do other projects such as weddings, slideshows, motivational videos, personal recruiting videos.

“So I have just added those services to my business,” Riggs said. “An average highlight video takes about 20 to 30 hours to complete by the time you capture all the footage, pick the plays and make it just right and burn it.”

One of Riggs other big products was the recent 1969 T.R. Miller football state championship reunion.

“The 1969 video was fun to do because I felt like it would mean a lot to the people involved if I could pull this off the way I dreamed it up in my head and I believe I came close to what I had in mind,” Riggs said.

“It is not really football season, which I consider my “busy” season,” Riggs said. “I have done a few random jobs for people here and there and have done a couple wedding videos. I believe enough people know about me now that they are going to use me next year, or at least I hope so. I was never in this business to get rich, but it’s nice to actually earn a little money for myself to save up or spend however I so choose.”

Another thing Riggs has done is created a Website for T.R. Miller’s football team www.millerfootball.com.

“I never thought I would get into doing websites, especially knowing what all they involve with coding,” Riggs said. “However over the years it has become increasingly easier to design them. I always wanted Miller to have a website. I wanted a way to show people where I came from and why I was so proud of where I came from. What a better way than a website I thought.”

Riggs started the Website last year with something very basic and within a week, the site had exceeded what the service provided them so we had to immediately step it up several notches to keep up with the demand.

“I wanted to create something that players past and present could go see what was the latest in Miller football,” Riggs said. “I want the past players to be able to go on there and read about their era and have photo and video to go along with it. Also I wanted current players to be able to brag and show off where they play at. We still have a lot of things in the works for the Website, some of it has not even been unveiled yet. We want people to be able to come back to the site and every time see something new. It is hard in the off-season, but we hope that once august gets here we will have new articles daily.”

After college, Riggs says his plans after college are to get his masters degree and pursue his coaching career.

“My business plans are still a little up in the air right now,” Riggs said. “Looking back I realized I should have started it a little sooner to get my name out there a little more, but you live and you learn. As of right now I do not know how much time I will be able to put in hands on with video projects in the future when I get a job and am a full time coach. One idea Justin and I have discussed is to hire some college kids with a passion for athletics and know enough about computers to have this thing keep going for years.”

Riggs said he has known since an early age that he wanted to be a coach.

“Most kids dress up at Halloween as a doctor or a pirate, I dressed up as a coach,” Riggs said. “At job day at school you tell about what you want to be when you grow up and you dress like that profession, well I wanted to be a coach so I dressed up like my dad.  There has never been a doubt in my mind that there was anything else out there for me.”

Riggs said his dad’s success is definitely something that stands out, but he is not really sure that is what made him want to go into the profession.

“I enjoy it (being the son of legendary T.R. Miller coach Jamie Riggs),” Mikel said. “I am very proud of my father and all his accomplishments. He is a very humble man, father and coach. I have learned a lot from him over the years not only about football, but other areas of life. He has introduced me to many people over the years who I hope one day will give a young coach a chance. His knowledge of the game itself is incredible, but I have also learned so much about how to deal with kids and how to handle problems that come up in the most professional manner possible. I mean we probably talk more X’s and O’s on a daily basis but the real knowledge that I get from him is just watching and learning how he handles things that do not deal directly with the game of football.”

Mikel said he would love to be a full-time assistant coach under his dad.

“If he could hold on that long and stay in coaching, yes I could see myself as doing that,” Riggs said. “I really like the idea of him working for me one day like Lane and Monte Kiffin.”

While coaching with his dad would be a neat idea, Riggs said coach at T.R. Miller would also be neat.

“I think anytime you have a chance to go back to your hometown and try to make a difference, it has the possibility to be great,” Riggs said. “That does not matter what profession you are in, it could be as a business owner or as a teacher. The opportunity to go back to a place that made you what you are today and try to impact the new generations for the better is awesome. Coaching is the best profession in the world. What other job on earth do you get a chance to impact 50+ young men (depending on size of team) on a daily basis? It is the opportunity of a lifetime and as a future coach you have to respect that aspect of it and preserve it and do your best to uphold the ethical and moral values that great coaches before have set.”

Riggs said that he appreciates his dad giving him the opportunity to come back this summer and help with the summer workout program as it gives him another opportunity to get in there and do what he loves.

“I love being around young kids playing a sport I love,” Riggs said. 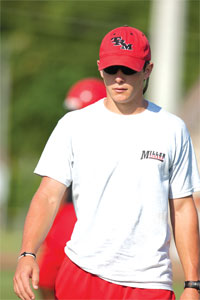 Special to the Standard Former T.R. Miller Tiger Mikel Riggs hopes to follow in his dad’s footsteps and become a coach.