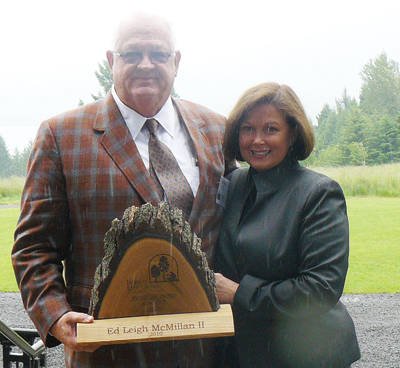 Ed Leigh McMillan knows he was “born to be in the timber business.”

“I come from a long line of people involved in timber,” he said.

Tom McMillan has been singled out to be given the Forest Landowners Association’s award for Young Forest Landowner of the Year award. This award is given to individuals under the age of 50 who works in a family business with land, and is actively involved in the management of the forestland and in their local community.

Ed Leigh graduated from North Carolina State College, where he studied forest management. He then received his degree in finance at the University of Alabama in 1964. He returned to Brewton after graduation and began his work as the first forester of T.M. Miller Mill Company.

For more than 40 years he has served in the company as woodlands manager, vice president, treasurer, corporate secretary and a member of the board of directors. He also served as president and a member of the board of directors for Cedar Creek Land and Timber in Brewton since its inception until he resigned in 2006. He has been an active member of FLA for more than 40 years, and he is a past president of the association. He is also past president of Neal Land and Timber Company in Blountstown, Fla.

According to the FLA, Millan is a true steward of the natural resources: land, timber, wildlife, water and minerals. From an early age, he was schooled to husband and preserve the land. It is a lesson he has practiced and undertakes to pass on to the future generations.

His great grandfather, T.R. Miller was the first to become a timber man. T.R. Miller’s daughter, Alva Lee Miller, married Ed Leigh McMillan I in 1911, and in 1912, their son, Thomas Edward McMillan was born. Ed Leigh II came along in 1940.

“I was born into a family who has a long history in timber in southeast Alabama and Florida,” Ed Leigh said. “I was the first forester to work at T.R. Miller, and I have spent my whole working life in timber and still directly manage 60,000 acres of land.”

Being a forester means a lot more than cutting down trees. People like McMillan are involved in management and reforestation of the land they care for. Forests are a renewable resource and with men like Ed Leigh McMillan, the timberland will still be there for many years to come.

Ed Leigh said the award was a pleasant surprise.

“We have been a part of the Forest Landowners Association for many years,” he said. “I got a call to come to Stevenson, Wash., to receive the award given by the Forest Landowners Association. I have received many awards but this one is special because it is on a national scale. I give credit of my success to T.R. Miller, Ed Leigh McMillan I, and Thomas Edward McMillan. I want to thank them for providing an opportunity for me to be involved in it all. I was told that before he died T.R. Miller told my grandfather, ‘Ed Leigh, if we are going to stay in the timber business, we need to start buying land and support pine sawmills. Timberland is a natural renewable resource,’ and I am glad that my family gave me the opportunity to work with forest land all this time.”

Nephew Tom McMillian III is following in his uncle’s footsteps and in the family business.

Tom McMillan is a commercial developer in Charlotte, N.C., and owns forestland in Chesterfield County, S.C., and in Wake County, N.C.

McMillan has “an excellent land stewardship, including multi-resources management for timber production , aesthetics, and recreation, and is respected by his peers,” said Derek Dougherty, recipient of the Young Forest Landowner of the Year award in 2009, who nominated McMillan for the award.