Kay Hammac was simply trying to mow the lawn at her Foshee Road home Thursday morning.
But a faulty engine apparently exploded in the carport and sent the house up in flames. The wooden house was fully involved by the time firefighters from Brewton, McCall, Pineview, Friendship and Barnett Crossroads arrived just after 9 a.m.
“My friend usually does the grass cutting,” Hammac said. “I thought that I would go ahead and do it for him. I went to crank the motor when it exploded. The lawnmower was in the carport when it exploded and all the fire went to the roof of the house.”
Hammac said she was most upset to lose priceless memories.
“I just can’t believe that this has happened,” she said. “I have lost everything, including all my photographs of my daughter, and a lock of her hair.”
Hammac’s mother Norma Rodgers arrived on the scene to comfort her daughter.
“I am just so thankful that she is all right,” Rodgers said. “Most everything else can be replaced.”
While the Foshee Road fire appears to have been caused by the lawnmower, state fire officials are still looking into several fires in the Appleton community last week, including one on McGougin Road and two on Memory Lane.
State Fire Marshal Ed Paulk said the fires had several similarities and are under suspicion for arson.
“The fact that none of the buildings that burned had electricity going to the house or any natural reasons to burn, makes us very suspicious,” Paulk said Wednesday. 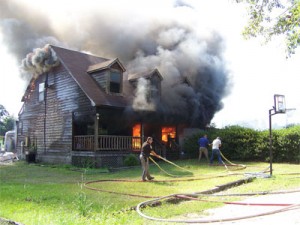 Front of the house on Foshee 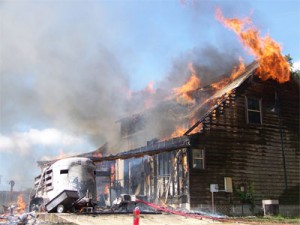 Back of house. Pictures by Adam Robinson