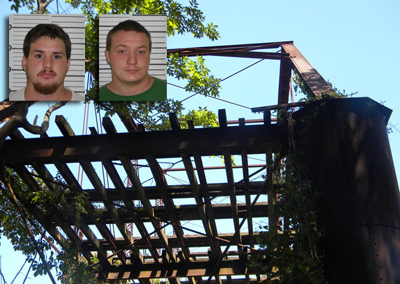 Two Brewton area men were arrested and a third is at large after Covington County authorities discovered damage done to a historic bridge in the Mobley Creek community.

Deputies responded to a report that someone had cut steel I-beams from the historic Hart’s Bridge — located next to a new cement bridge — and found several men using a welder’s torch to cut steel beams from the old bridge.

Cody Brian Grantham, 20, of Brewton, and Joshua Allen Gradeless, 19, of East Brewton, were charged with first-degree theft of property and and first-degree criminal mischief, both felonies. They were held on $30,000 bond each, sheriff’s officials said.

“It is sad to see an important piece of Covington County history violated like this,” Covington County Sheriff Dennis Meeks said. “Their behavior is absolutely unacceptable, and we intend to hold them to the fullest accountability under the law.”

Sheriff’s officials said Grantham and Gradeless confessed to their part in the crime; the third man was released without charges.

Haskew is wanted by the Covington County Sheriff’s Office for his alleged part in the thefts, officials said.