In the state Babe Ruth 15-year-old tournament in Satsuma last week, the Brewton All Stars went 2-2 in pool play.

Brewton opened the tournament with a 13-0 win over South Bibb Saturday and defeated Opp 7-6 Sunday to improve to 2-0.

In their third game Monday, Brewton lost to Satsuma 10-9 and needed a win Tuesday to advance to the semifinals of the tournament.

Tuesday, in the final game of pool play, Brewton lost 12-2 to Etowah to be eliminated.

In the opening round game of the tournament Brewton started off hot winning 13-0.

Brewton scored three runs in the first inning, two in the third, sixth in the fourth, and two in the fifth while holding South Bibb scoreless.

Cam Blackman earned the win on the mound for Brewton.

At the plate, Ryan Hunt was 1-for-2 and Christian Purvis was 2-for-4 with two RBIs.

Hunter Mullins was also 2-for-4 and had one RBI.

Darby Black was 1-for-4 and Blackman was 1-for-3 with a double and two RBIs.

Tyler Dehoff went 1-for-3 with three RBIs and Dominique Jackson was 1-for-3.

From there, Brewton plated two runs in the bottom of the inning to get the win 7-6 and stay undefeated with a one-run win over Opp.

Brewton scored one run each in the second and fourth, two in the sixth, and three in the seventh.

Hunt went six innings on the mound and Black went one inning.

Hunt was 1-for-4 and Purvis was 2-for-4 with Mullins who had a triple and one RBI.

Black was 1-for-3 with a double and Blackman was 2-for-3 with one RBI.

Brewton suffered their first loss in the tournament to Satsuma Monday 10-9.

Satsuma scored four runs in the first inning against Brewton and added one in the second inning to hold a 5-2 lead after three innings.

Brewton cut the lead to 5-3 in the top of the fourth inning before Satsuma scored four more in the bottom of the inning to take a 9-3 lead.

Dylan Godwin was 2-for-3 with one double and one RBI and Jackson was 2-for-5 with two doubles.

After Monday’s loss, Brewton needed a win to play in the semifinals but lost 12-2 to Etowah.

Brewton’s lone two runs were scored in the fourth inning while Etowah scored four in the second, one in the third and seven in the fourth for the win. 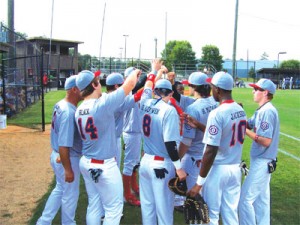 Adam Robinson | The Brewton Standard The Brewton Babe ruth 15-year-old All Star team meets before one of their district games in Brewton early this all star season. Brewton advanced to the state tournament in Satsuma and went 2-2 but failed to advance out of pool play.