Fans of T.R. Miller Football have a new venue to learn more about their favorite high school team.

Thursday began a new era with the T.R. Miller Tiger football coverage with the debut of Tiger Talk held live from The Oak’s restaurant.

Show correspondents will be David Jennings and Michael English. Jennings will provide color analysis while English will bring views from the crowd to the broadcast.

Thursday’s broadcast over WKNU, 106.3 FM, was the first of two preseason editions held to preview the upcoming season of the Tigers. The show is also streamed live via the Internet at www.millerfootball.com. A second preseason show will be broadcast on Aug. 12.

Mikel Riggs founded the Tiger Talk concept and was excited about the first broadcast.

“We had a little trouble there at the end with our wireless mic but we had a good crowd there and we are going to get it perfected,” Riggs said. “I kind of believe it is like the field of dreams, if you build it they will come. We are going to build it and more people are going to come and tune in. I think we averaged about 17 people to watch it online and I don’t know how many were listening on the radio.

“We had a good crowd out on the deck and we are going to get it where you can hear it better there and hopefully it will be a big thing one day soon. We are hoping this first year, we will build up this good standard and there is no telling when and where it will take off from here.”

Jennings said the first broadcast was interesting and hopes the show will take on a life of its own.

“I thought the guests were great,” Jennings said. “David Stokes and Shine McCracken, without any prepping or briefing at all, did absolutely what I thought they would do and talk about their experience while at Miller and some of the players they watched as kids.

“I was very impressed with the current Tigers and it made me proud being a former player here to see the quality of the young men that we have. I was really impressed with them and I was impressed the future Tiger Zac Griffin. He is only a ninth grader and was very composed. I could tell he was a little nervous, but he handled himself well and I think it was a good day for the Miller football program.”

The first broadcasts will have a week off between shows, Riggs said. Once the season begins, the show will be held each Thursday.

“We are going to go a week in between this first time,” Riggs said. “Once game week gets here, it will be every Thursday. Hopefully we will be able to get some more guests on there, some good ones, and get it going. Dad (coach Jamie Riggs) is in charge of the current Tigers and DJ (David Jennings) is going to get the older guys to come in. We may not always have two guests.

“We may try and get down to one. We had plenty of people to talk this first time and I think it went great. We just don’t want to run out of our supply early.”

Jennings said he thinks coach Jamie Riggs was pleased with the program as well.

“We had good crowd there and we are looking to build on that in a couple of weeks,” Jennings said. “As the season gets going I hope that everyone’s culture will be conditioned to be at The Oak’s on Thursday nights. I am looking for a little more crowd interaction towards the end of the show.

“That did not happen this time because of some problems we had, but I think we had some fun and I am looking to see how this thing progresses toward the season.”

Coach Riggs said that he really thought Tiger Talk went well Thursday and it is going to be a good thing.

“I really liked having the guests and the old guys were funny,” Coach Riggs said. “The more we do this in the future, they can tell the old tales and do some things. The idea of having the younger ones on also was good.

“When I did it in the past, we did it during the school days and we were not able to get the kids on there. I think having them on there is a good thing. I think it’s going to be fun.”

An additional aspect of the show will be interactive sessions from the Website, Riggs said. At the bottom of the Website page, a chat forum can be found so listeners can submit questions and comments for the show.

“We had a little interaction here, but we are in the process of getting another camera for some crowd shots,” Riggs said. “We only have one shot now with the people talking at the table on the radio. I don’t know how it looked live on the web, but I am sure there were some hiccups depending on the Internet connection.

“Hopefully we will get all that worked out here in the next few weeks and it will be flawless. I know you can go back and watch it later from the Website and I am going to try and get it for our podcasts. Basically how it will go every week is the same format as it was with an opening segment of talking about whatever. Then when the season starts, they will talk about last week’s game.

“Then the game Friday night then a former Tiger and then a current and then a future Tiger then a little Q and A session after that. It was pretty much a good solid hour talking about Miller football which is good. We will get it going and people will pass the word.”

A story of the M club’s first meeting can be seen next week.

For more information about Tiger Talk or the M Club, visit the school’s Website at www.millerfootball.com. 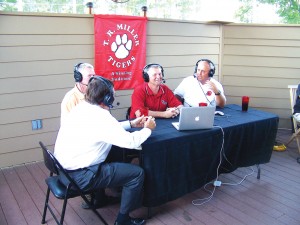