The team won the second place team trophy at the Gulf Coast Area Aquatics League scoring a total of 754.5 points combined by all teammates.

The Tigersharks competed as the smallest swim team at this years meet, but won the largest percentage of high point winners over any other team represented at the City Meet. The Tigersharks Swim team is coached by Angel Boyd and Brandee Morris.

Boys Overall Swimmer of the Year was Colby Morris and Girls winner was Elizabeth Glass.

The Most Improved male Swimmer was Cole Jernigan and the Female winner was Sara Scott. The 2010 “Tigershark award” went to Payton Baxter.

The team is currently taking registrations for the fall session. 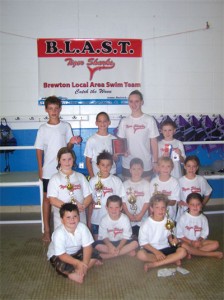