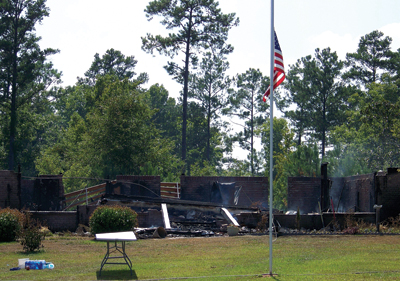 The Appleton Volunteer Fire Department was called to the scene of a house fire early Tuesday morning on Foxtrot Lane, off Lowery Landing Road.

“We were able to get several firefighters,” Appleton Volunteer Fire Department Chief Michael Tyler said. “We arrived at the scene of the fire within five minutes, and the structure was fully involved. The roof had already fallen in, and there was not much hope of saving anything.”

Volunteers from the Wallace, Pineview and Barnett Crossroads fire departments also helped at the scene.

“We were able to contain the fire at around 2:25 a.m.,” Tyler said. “There was plenty of water for us, as there was a water hydrant nearby.”

Tyler said the owners of the house were not at home at the time of the fire, and there were no injuries.

“(The owners) were off looking after a family member when it happened,” Tyler said.

Tyler said fire officials do not believe the fire was suspicious, although there have been several suspected arsons in recent weeks in the Appleton area. “I talked with the deputy fire marshal and we believe that there was no foul play in this fire,” Tyler said. “We have had so many fires this summer and several have been suspicious. The investigation is still under way for those.”

Last month, firefighters responded to a fire at an abandoned house on Memory Lane. They had responded to an earlier fire on the same street, and fire officials believe both are suspicious.