One week from tomorrow, the W.S. Neal Lady Eagle volleyball team will take to the court for their 2010 season opener.

The Lady Eagles will start the season with area opponent Thomasville on the road in a varsity game at 5 p.m.

“We had summer workouts on Tuesday and Thursday afternoons,” Shelly said. “Summer workouts went well. Both the JV and varsity teams progressed well throughout the summer.”

In the summer volleyball team camp in Flomaton, W.S. Neal was able to get a head start for the 2010 season.

The team began play on a Tuesday with the Lady Eagles of W.S. Neal going 0-4 including a loss to T.R. Miller.

The Lady Eagles followed with a win over Jay and lost to Cottage Hill later in the day to go 2-1 on Wednesday and 2-5 overall.

Shelly said participating in the summer team camp is always a good way to end the summer.

“It allows you to see the aspects of the game to work on in the first week of practice.”

“The girls will now practice three days a week until the season begins,” Shelly said. “We worked on various drills as well as different offensive and defensive set ups.”

W.S. Neal will be in a different area during the 2010 season after all schools were reclassified.

“We have changed areas this year,” Shelly said. “Jackson will stay in our area but Monroe County and Thomasville have moved into it. I think this season, like all seasons, will have its ups and downs. We play some tough teams in our area as well as within the county. We lost some key players from last year for various reasons and will have to work hard if we want to compete.

“We return many of our JV players from last year, but like the varsity team, they too will have to work hard in order to compete and be successful.”

Along with the first game of the season against Thomasville on the road Thursday, Aug. 19, the team will have their first home game on Tuesday, Aug. 31, against Flomaton. 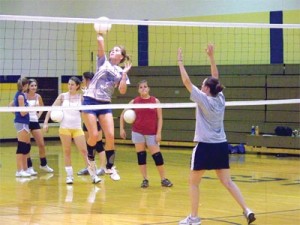