Girls of summer: Tigers getting athletic

The Lady Tigers will start their 2010 season Thursday, Aug. 19 when they take on Baldwin County and Robertsdale on the road in Bay Minette in a tri-match.

“Our summer workouts were probably the best they have ever been,” White said. “Attendance was great and if someone was not there, I knew where they were. They were allowed two free misses and obviously some of them took them. Other than that, we had great attendance everyday with at least 20 of our 26 in the program were there every day.”

One new addition to the Lady Tigers summer workout season was the addition of the new weight room in the old gym on the campus of T.R. Miller High School.

“We got the new weight room and we worked some in there, but we did not have all the equipment in there yet so we did some new stuff, but we are proud of the new room,” White said. “We changed it up a little this summer doing some more skill work than we did weights. This was the first time we did that since I have been here. I was just trying to make things a little different. I think that will pay off for us in the long run.”

White said the team competed in one volleyball team camp during the summer.

In the third game tiebreaker set, T.R. Miller held a 4-2 lead before a Straughn player got hurt. Since the team had no more substitutions, the game had to be forfeited giving T.R. Miller the win.

The Lady Tigers ended play in the tournament later in the day with a win against 6A Foley. T.R. Miller finished the tournament Wednesday with a 3-0 record and went 3-1 Tuesday beating Jay, W.S. Neal, and Pleasant Home before losing to Baldwin County for an overall record of 6-1.

“We did OK there,” White said. “I was proud of the way we played. We played overall pretty well. We just spent more time on the courts in the summer than we did in the weight room. I just hope that transfers over to the season.”

White and his team began the first week of practice last week in preparation for their first game a week from tomorrow.

“The first week was last week and I actually gave them a day off to enjoy their last day of the summer,” White said. “Things went real well. I have five seniors that have been playing for a long time and I am finally seeing some senior leadership out of those guys and that is huge when you have five that has been playing for you for a couple of years. So I can tell from a leadership standpoint, the seniors are doing a great job.”

Along with the senior leadership White mentioned, he said the enthusiasm and athleticism is there this year.

“The young bunch is starting to figure it out,” White said. “Like I told them at the end of practice today, athletically, we are OK. We got some learning stuff to take care of but I like where we are as far as the kids that we have. I have a great bunch of kids.”

White said he and his players are ready to get started for the 2010 season and are looking forward to it getting here next week.

“We have our first scrimmage this Friday night,” White said. “We will start at 5 p.m. The following week, the varsity has their tri-match against two 6A schools. So we are really looking forward to that. That will be a big test right of the bat and will let us know where we are.”

Along with the tri-match, T.R. Miller’s first home game will be Thursday, Sept. 9 against W.S. Neal. 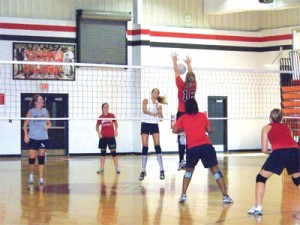