For the T.R. Miller football team, the black jersey has always been a jersey of pride and intimidation for a certain opponent on particular Friday night. The jersey is usually worn on a special game other than the original red home jersey.

Thursday, it was a sign of mourning as T.R. Miller students and administration dressed in black attire and football players wore the black jerseys and gathered at the school at 7:30 a.m. for a time of prayer and remembrance of principal Donnie Rotch. In addition to his teaching and administrative duties, Rotch had a long history as a coach at the school.

“Donnie’s first year coaching here was in 1974 and he came and was the offensive line coach which he did until 1991,” Riggs said. “He was also baseball coach during that time. So he did that for about 17 years. The 1991-1992 school year was his last year coaching.”

After his final season of coaching in 1992, Rotch became assistant principal and later was named principal, Riggs said.

“I had known him while I was in college as he had come to coach here,” Riggs said. “I got to know him then. I came back here in 1983 and I was running defense and he was the offensive line coach. We butted heads all the time, but you get pretty close when you are with somebody that much and I just really enjoyed being around him in those days. He was fun, he was enthusiastic. He was just a great coach. I learned a lot about coaching from him.”

Riggs said he later came back to Brewton in 1989 and Rotch was still at the school and he just continued his role as a coach.

“He was the first person to call me then,” Riggs said. “So he was an assistant coach for me for three years.”

Rotch and Riggs shared the 1991 state football championship, with Riggs as head coach and Rotch as an assistant.

“That was his last game — the 1991 state championship game,” Riggs said. “He was always such a positive person and a hard worker. He made a list every day and he was going to get that list done. He taught me something about making a list. In those days as assistant coaches, we would sit around and spend a lot of time talking about some things and just sharing stuff with each other a little bit. It was just fun.”

Riggs said the first thing that went through his head Wednesday night after hearing about the accident was unbelief.

“It is just unbelievable,” Riggs said. “You could just feel the weight today. Not only from the school but through the community as well. He meant such a large part of this community being here 36 years. In the years when he was a coach, he had the opportunity to go to be a head coach somewhere, but he stayed in Brewton. He did that and later went into administration. But, it is almost inconceivable because he has been such a large part of everyone’s life for such a long time.”

Riggs said, although it is still early, there would be some way of remembering Rotch this football season.

“I’m sure we will honor him in some way,” Riggs said. “We will put a little thought into it. Right now, it is mourning time. We will mourn right now and put some thought into that later.”

Festivities Thursday and Friday at the school — Tiger Talk radio show, M Club meeting, and football and volleyball scrimmages along with a quarterback club meeting and tailgate — have been canceled or postponed.

“I am pretty sure we will not have the scrimmage Friday night,” Riggs said. “We will take it day-by-day here for a day or two.”

W.S. Neal recently loss their principal of 20-plus years in Phillip Ellis to cancer. Ellis died almost exactly a month to the date before Rotch’s death.

“After they lost Phillip and now Donnie, it is tragically ironic,” Riggs said.

Asked about seeing the black jerseys being worn for such a sad occasion Thursday morning rather than on the football field on a Friday night in the heat of a battle, Riggs fought back tears.

“I think you could see from the kids today that they recognized what he meant and what he meant to the school and to them,” Riggs said. “He expected everybody to do their best. From students to teachers to everybody, our students recognized that. That was the interest he wanted. He wanted this school to be good and I hope that we will honor his memory in the days to come by making that extra special for right now. I hope we will all try and do that and honor his memory in that way.” 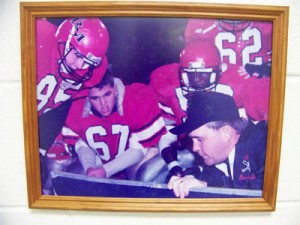 Rotch draws up plays in his coaching days 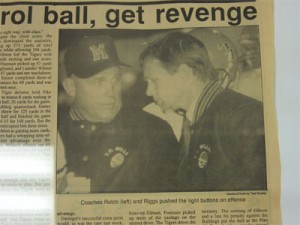 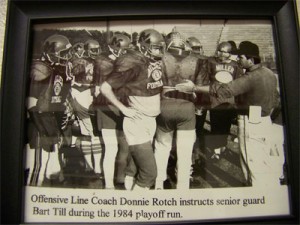 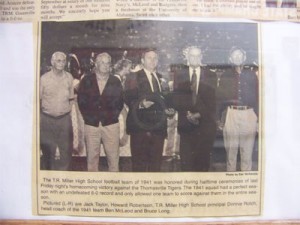 Rotch as principal with 1991 team being honored 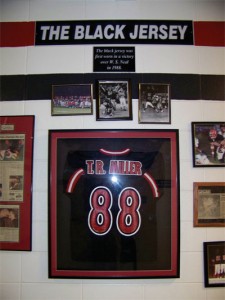