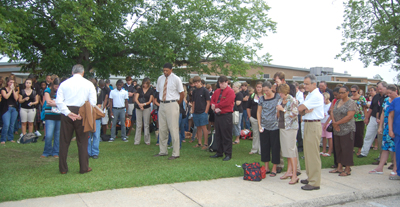 Shocked and grieving students and teachers gathered on the lawn of Donnie Rotch’s beloved T.R. Miller High School Thursday morning to pay tribute to the principal, who was killed Wednesday night in a head-on collision.

The prayer service was organized by students through Facebook and text messages as the news spread of Rotch’s death Wednesday night. Nearly every student wore black, and many were in T.R. Miller T-shirts.

“Lord, we have a need to comfort one another,” Superintendent Lynn Smith said as he prayed with students. “We also celebrate Donnie Rotch’s life. He’s shown us commitment. He’s shown us what it takes to do it the right way.”

Police said Rotch was killed when a vehicle driven by Martin Reid hit him head-on in the southbound lane of U.S. 31 North as Reid was being pursued by Brewton police. Reid was attempting to pass another vehicle at the time.

Police Chief Monte McGougin said Wednesday night he was still gathering information about the crash. A police press conference has been scheduled for 1 p.m. today.

At Thursday’s prayer service, T.R. Miller teacher and basketball coach Ron Jackson said Rotch was a “loving man, and he showed it in his actions.”

“He was the epitome of a teacher,” Jackson said. “He taught not only with his words but with his actions.”

Students and teachers also prayed for Rotch’s family, including wife Jane and children Jamie and Richard.

“In this community, we have lost two leaders,” Mathieu said.

Rotch was known for arriving at T.R. Miller early every morning, Mathieu said. Wednesday night, students put a cross and flowers near his parking spot at the school.

Counselors and area pastors gathered at the school Thursday to help teachers and students cope with their grief. Following the prayer service, school officials talked to students about the grieving process.

“Recognize that we’re all going to need each other,” Assistant Superintendent Baxter Baker told students.

“He was here because he loved his job, he loved T.R. Miller High School and he loved you,” Baker said of Rotch. “He had Tiger pride, Miller pride. Mr. Rotch helped create that.”

“Every time he got on to you and told you to tuck in your shirt or pick up your grades, that was love,” Bell said. “He wanted you to be the very best you could be.” 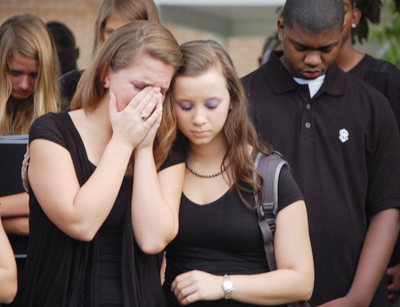