Donnie Rotch will long be remembered for the many roles he played in life. As a father, husband, son, brother, friend, coach and principal, Rotch lived a “tradition of excellence.”

The Rev. Ed Glaize and Mike Sasser offered words of comfort and remembrance during services held for the fallen leader Saturday at First United Methodist Church.

Glaize spoke on Rotch’s love of family, friends and God.

“Donnie traditionally lived excellently,” Glaize said. “He wanted others to excel and live up to their potential. He lived a long and loving relationship with Christ. It was Christ working in him that allowed him to pass on excellence to others.”

Rotch was killed in a two-vehicle crash Aug. 11 on U.S. 31 North just after 8 p.m. The crash also claimed the life of Martin Reid, who was driving a second vehicle being pursued by a Brewton police officer. The incident remains under investigation by the Alabama State Troopers homicide division and Brewton Police Department.

After the crash, flags in Brewton were lowered to half-staff, and several signs in the city, including one at T.R. Miller High School, offered messages about Rotch.

At the funeral, Sasser remembered his time as a coach with Rotch at T.R. Miller High School and how he expected the best from players, students and personnel at the school.

“I had the good fortune to coach with Donnie at T.R. Miller,” Sasser said. “He was a great guy and set the bar high for everyone. He was attentive to detail and always offered constructive criticism. If he ever called you Hoss, you knew you were about to get some of that criticism.”

Sasser said Rotch was more than a leader at the school he loved for so many years.

“Donnie had several opportunities to go to other schools during his career,” Sasser said. “Instead he chose to say at the place he loved the most, and we are all better because of it. T.R. Miller has lost both a leader and its No. 1 fan. I challenge the students, faculty, staff and parents of T.R. Miller High School to unite like never before to make this the best year ever. Let’s do it as a tribute to honor this wonderful man who we will long miss.”

Rotch’s legacy of striving for excellence will long be remembered, Glaize said.

“Donnie Rotch is T.R. Miller,” Glaize said. “It showed in his life and legacy. He worked hard and pushed others to do the same.”

Glaize said Rotch’s life may have ended suddenly, but his memory and his soul will live on.

“Donnie Rotch is not dead,” Glaize said. “He was snatched quickly from us and his body was badly broken but the soul in that big old body is alive. This past Wednesday, Donnie rounded third and headed for home.” 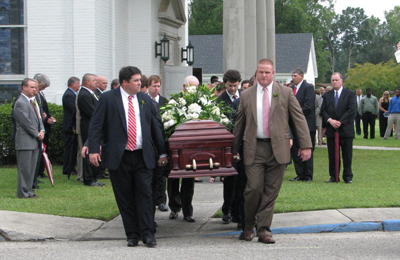