East Brewton Police were busy for about three hours during mid-day today after an ice truck clipped a power pole in the city and flipped as a result of the incident.
Officer Clemente Brooks said an ice delivery truck owned by Excel Ice clipped a power pole at about 10 a.m. Monday morning near the Kangaroo Express convenience store on Forrest Avenue.
“We got the call at about 10 a.m. this morning and were working that accident until about 1 p.m.,” Brooks said. “No one was injured in the accident.”
Brooks said emergency personnel examined the driver and a passenger at the scene, but no serious injuries were reported.
“One had a small bump on the forehead and the other had a few scratches here and there,” Brooks said. “They were not seriously injured.”
Traffic through East Brewton was snarled throughout the three hours rerouting motorists for a period of time through side streets in the area. 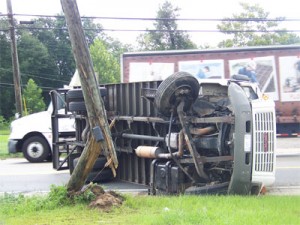