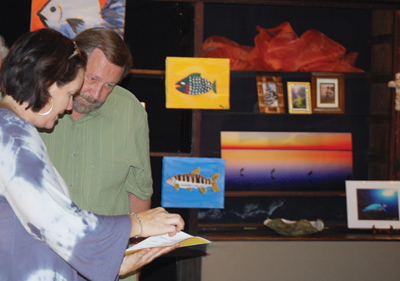 Nine-year-old Lyon Jernigan’s colorful painting of a fish sparked the idea for an art auction to benefit the coast — an auction that has grown to include 200 pieces, ranging from paintings and photography to pottery and jewelry.

The Funds for Fishes auction, which will be held from 5 to 7 p.m. Thursday at The Hourglass, has kept the Jernigan family busy since they began collecting artwork in early July.

Lyon’s mother, Emmie Jernigan, said she believes the cause — helping the gulf coast in the wake of the oil spill — has touched those who have donated and those who plan to attend and bid on the art. Proceeds from the silent auction will benefit the Dauphin Island Sea Lab Foundation.

“It has resonated from a feeling of helplessness,” Jernigan said. “We feel like there’s nothing we can do, but there is something we can do.”

With art already being set up at The Hourglass on Tuesday, the walls and tables in the building are filled with paintings and other renditions of fish and sea life. While the Funds for Fishes theme is not the only subject of the artwork, it has been a dominating theme.

Jernigan said she never thought the family project would generate so much attention, but she is grateful.

The event will offer food and drinks, and attendees will have the opportunity to bid silently on any piece. Each piece will have a minimum bid, and bids will go up incrementally by $5.

Jernigan said the show not only supports the coast but also the artists themselves.

“It’s an opportunity to be exposed to different artists,” Jernigan said. “This is from all over the country, but local artists have also been big supporters. This is a great way to support them.”

Jernigan said the response from artists and others who simply want to help the coast has been inspiring.

“That’s what has touched my heart,” she said. “They have a passion for the gulf coast. Even if they can’t be here, they are with us.”