For the 2010 T.R. Miller Lady Tiger volleyball team, there is one main goal they have set: advance out of the area tournament to the state tournament in Pelham.

The Lady Tigers will have their chance to set out and begin that journey to accomplish that goal Thursday as they start their season with a tri-match in Bay Minette against Baldwin County and Robertsdale.

“We have four seniors that are going to start for us,” White said. “It would have been five but Teralyn Moore is injured and out for the season. So we have four girls that have played a lot of volleyball over the last few years since seventh grade. They have come up through our system and they are a good bunch. They work hard, they have a good attitude, they get after it. I am looking for some great leadership from those guys and they have shown it all summer and the preseason so far. It makes a big difference when you have kids like that who have been playing together for five years together and now they are gelling really well.”

White said with Moore getting hurt, Leah Brundidge has had to step in as a setter.

“She played some setter for us last year so it is not like we are having to bring a new setter in there,” White said. “Her and Teralyn split time there for us last year. So her playing time there last year should be able to help us out there. Overall, we are meshing together as a team very well. The fact they have played together at some point and time over the last five or six years with middle school, JV, and now varsity, they have played together a lot. They know each other’s tendencies and quirks, so hopefully that will pay off here towards the end.”

“Natalie plays the outside for us and has been starting on varsity since her freshman year,” White said. “She does a good job and is a consistent server. She is very smart on the net. She knows when to kill it or tip it over. That comes with her experience. Leigh Margaret is an outside player and has been playing varsity the last two and a half years. This is her third year on varsity as she played a little bit as a freshman due to some injuries. She has played some middle for us but has turned out to be a pretty good little outside player for us. She can get up and put the ball down and she just makes plays and gets it done. She is always in the right place at the right time.”

Playing the setter position for the Lady Tigers will be Elizabeth Nelson.

“She is a senior and has been playing since her seventh grade year,” White said. “This is her third year starting on the varsity level. She started as a sophomore again due to injuries and she stepped in there and did a good job for us. She has a chance to be our best server. She struggled some with consistency last year and we have been working on that. She is also a good setter and floor leader.”

Other setters for the Lady Tigers are Moore, Leah Brundidge.

“Teralyn got injured during the spring last year during track and softball,” White said. “She had surgery over the summer and would have been a starter. We will miss her from that standpoint, but she will be with us and do what we need her to do. Leah is entering her second full year on varsity. She played some in spots helping out on the back row. She and Nelly are working their kinks out working on their communication a little better.

The last senior, Emily Waters, is playing the middle this season for the Lady Tigers.

“She has been playing since seventh grade,” White said. “She is doing a good job. She is not the tallest person in the world, but she does a good job for us on the net. She is surprising with her ability on the net to knock balls down blocking shots, and she hustles all over the floor.

“She mainly plays middle but she is also a very good server.”

Another middle player for the Lady Tigers is junior Taylor Guthrie

“Taylor is a junior and this is her third year starting on varsity,” White said. “She is coming into her own a little bit playing at the varsity level. She was a little timid last year, but she has got a little better over the summer. She is going to be a very good middle player for us.”

Amber Nelson is also a junior player for the Lady Tigers this fall.

“She is the tallest person on the team,” White said. “We moved her up last year at the end of the season as a sophomore. She has had a great summer for us and she has realized she has a height advantage. She is taller than everybody else and she can jump a little higher and she is figuring that out so we are expecting some good things out of her this year. She will play some front row for us and is a great blocker.”

Other girls on the team White mentioned are Gerri Samuel and Miranda McNamara.

“Jerrica Watson is a junior and she is mostly a middle player. All those guys can see some action and can help us out in some spots.”

The Lady Tigers will be in an area with state powerhouse Bayside Academy, Clarke County and Washington County.

“Overall the schedule is the same from last year minus us picking up some 6A schools to start the season off with Baldwin County and Robertsdale,” White said. “I am looking forward to that to get a nice measuring stick right off the bat and see where we are as a team and a good starting point for us as a team win or lose.

“We will go down there and see what happens.”

“We have Monroe County as usual and the area opponents,” White said. “We still have Bayside who is the eight-time straight state champion. We have Clarke County who we played as 4A and we have Washington County and us. Getting through Bayside is going to be a tough order, but that is the goal to be able to play those guys for the area championship.

“We need to give ourselves a chance. What we are trying to do is to make it to the playoffs so we will see what happens.” 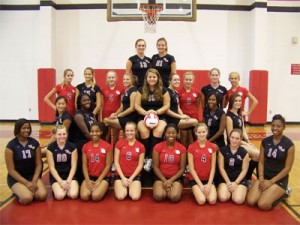