The W.S. Neal Lady Eagle volleyball team will begin their 2010 season Thursday on the road in an area game at Thomasville.

The varsity team this year consists of eight players.

Of the eight, six of them are seniors in Malary Booker, Whitney Douglas, Brittany Revel, Amanda Crawford, Britta Wood, and Rachael Browder. The remaining two are juniors in Paige Grantham and Lauren Boatwright.

Lady Eagle head coach Britney Shelly said, as her teams get ready to open their season against area opponent Thomasville, they will return three starters from last year.

“Malary returns at setter, Amanda at outside/middle hitter, and Brittany at outside hitter,” Shelly said. “Joining Amanda in hitting this year will be Whitney Douglas, Rachael Browder, and Paige Grantham. Assisting Malary with setting will be Britta Wood and our defensive specialist for the season will be Lauren Boatwright.”

Shelly says she expects for the 2010 Lady Eagles to be contenders for the area this year.

“We have a lot of talent on our team this year,” Shelly said. “It will be a matter of being able to come together as one in order to beat our opponents. We are very strong in hitting this year and have improved tremendously in the past few weeks with serving. However, our area of weakness is serve receive. It is something we have struggled with in years past and continue to struggle with.”

“Hitters this year will be Dixon, Lambert, and Gibson,” Shelly said. “Defensive players for us this year will be Cutts and Pettis. Due to an injury to Ellison that will put her out for much of the season, we have had to move Hadaway from outside hitter back to setter. Assisting Kaitlin in setting for our team will be White.”

Shelly said she expects the JV team to have another winning season.

“We only lost two games last year and I expect for us to be even better this year,” she said. “We have good setters this year as well as strong hitters in Stephanie Lambert and Gracee Dixon. Serving is another strong point for us. Our defense has stepped up a lot throughout the summer and I expect that to be the key to winning games this year.” 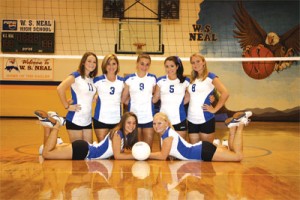