Stuck in the mud: WSN Eagles falter in second half against Opp

In muddy conditions Thursday night’s preseason football game in East Brewton, after a close first half, found the Eagles bogged down and spinning their wheels as the Opp Bobcats defeated the W.S. Neal Eagles 35-14.

The B-team players for both schools played the first quarter and four minutes of the second quarter with Opp holding an 8-0 lead when the varsity players took over.

With the varsity playing the remainder of the game, Opp’s varsity outscored the Eagles 27-14 to get the win.

Opp led 16-6 overall at halftime (8-6 in varsity action) before taking a 29-6 lead heading into the final quarter of play.

Opp scored one touchdown in the fourth quarter and W.S. Neal scored with 35.9 seconds left in the game to cut the lead to 35-14 overall and to 27-14 in varsity action.

Opp went into victory formation for one snap and ran the clock out for the win.

“First of all we got everyone in the game,” W.S. Neal Eagle head coach Kevin Jordan said. “That is what you look for in a jamboree game of that nature. We are going to get a chance to look at film and see everybody on film and go from there. I was disappointed in our play in the second half, big time. We played hard in the first half. We gave up a late touchdown there at the end of the last play of the first half and that took the wind out of our sails going into the second half I thought. That is when you have to suck it up and I was really disappointed in that.”

One good thing Jordan said he saw in the first half was the passing of Dylan Godwin to receiver Ashton Elliott.

“Ashton is going to be able to make some plays for us,” Jordan said. “We know when we moved him there he would be able to have the opportunity to make some plays for us. He did that tonight. We were just not consistent in any phase of the game. We ran the ball well at times and the other times, we were getting hit in the backfield. We threw the ball well at times, but were not consistent to drive the ball. That is why you play these games. You figure out what you have to work on and you go back and practice and get better and that is what we are going to do.”

Jordan said his team was set to practice Friday after Thursday’s game and correct some of the mistakes that were made against Opp Thursday.

“We will get ready for Flomaton next week in the regular season,” Jordan said. “They will be tough. It will be a great game for both communities. I know our kids will be excited and I know Flomaton will be excited. I am looking forward to it. We need to have a good week of practice because we have to get a lot better.”

W.S. Neal had 86 yards of total offense in the second half with five first downs. Before the 90-yard scoring drive near the end of the game, the Eagles had -4 yards of offense (-10 rushing, 6 passing) and no first downs.

In varsity action, the Eagles totaled 160 yards with 8 rushing and 152 passing.

The Eagles were 10-of-22 passing with one interception and two touchdowns behind quarterback Dylan Godwin and had eight total first downs.

The B-team Eagles had 21 total yards of offense with 29 rushing and -8 passing.

Eagle quarterback Tyler Joyner was 1-for-1 and the Eagles had one first down.

Altogether, the two teams totaled 181 yards of offense with 37 rushing, 144 passing and going 11-for-23 with one interception and nine first downs.

The B-team had 92 total yards with 84 on the ground and eight in the air.

Ashton Elliott caught five passes for 85 yards and had a 15-yard circus catch for a touchdown to lead in the air.

For the B-team Eagles, Damion Williams led the Eagles rushing with 21 yards on six carries.

W.S. Neal will start their 2010 regular season next week with another Thursday game as they travel to take on class 2A Flomaton at 7 p.m. 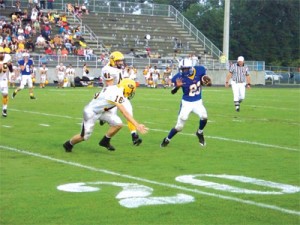 Adam Robinson | The Brewton Standard W.S. Neal Eagle football player LaTrae Williams, right, tries to elude a pair of Opp Bobcat defenders early on in the game Thursday night in East Brewton in a preseason game. Overall, the B-team and varsity Eagles lost to Opp 35-14 with the varsity losing 27-14 in two and a half quarters of play. W.S. Neal will travel to Flomaton Thursday to start their regular season schedule for 2010. 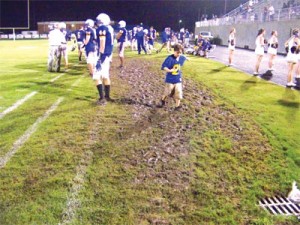 Adam Robinson | The Brewton Standard The sidelines and field were very muddy after rain earlier in the day and week.