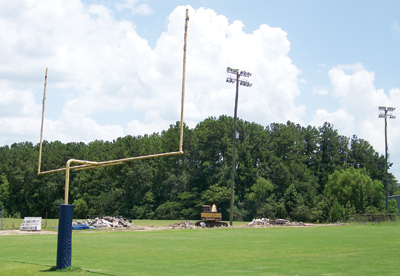 Memories and history are all that remain of the old Buddy Taylor Memorial Stadium, a stadium that has stood for nearly 50 years, these days after the stadium was demolished recently on the campus of W.S. Neal High School in East Brewton.

While the stadium is now in piles of rubble, some of its pieces will live — reborn again for new athletic memories.

Just as the old stadium was made from bricks when the old high school burned in 1951, the W.S. Neal baseball field now holds the old press box and will hold eight rows of bleachers from the old stadium on the home and visitor sides of the field.

“I played at W.S. Neal for four years, with three being under coach Taylor,” East Brewton mayor Terry Clark said. “They are tearing the stadium down to make more room. They now use the field as the practice field. It was getting dilapidated and they were just scared people would fall through. I played from 1958-1963 and was in the second grade when the fire happened. When the stadium was first built, it was a nice stadium. It served its purpose. It was named after coach Taylor because prior to him, Neal had not been good. He came, and they excelled.”

The stadium saw its last game in the football season of 2001 when the Eagles lost to rival T.R. Miller 28-0. In 2002, the current stadium opened.

Local radio personality Dennis Dunaway, who calls games for Neal on WEBJ, recalls many Friday nights at the stadium. Dunaway grew up on Mayo Street, just about 200 yards from the school, and he remembers attending practices there in the early 1950s.

“That old stadium has seen plenty of great football talent play there on Friday nights,” Dunaway said. “In the late 50s Lee Roy Jordan of Alabama and Cowboy fame was there as Neal played Excel. Lee Roy was a one-man show, but I think Neal won that game by one point. Kenny Stabler played on that field also. He was a Foley grad and went to star at Bama as well as in the pros. Ozzie Newsome of Alabama fame played at Buddy Taylor in a playoff game. Mike Sasser, Chuck Cunningham, Dowe Aughtman and Walter Lewis and many other greats from T. R. Miller players had a taste of that field as well.

W.S. Neal graduate Jessica Fountain, whose father Jim Fountain coached at W.S. Neal from 1996-2002, said she remembers and has heard about for many years about the stadium.

“I have many memories on this field,” she said. “My dad, Jim Fountain, was the last head coach to coach on this field. I remember being 9 years old running through the sprinklers on the field while my dad had Saturday meetings to when I was 13 years old helping my dad cut the field’s grass to prepare for practice the following week.”

Fountain said she “practically grew up” on the field at Buddy Taylor Stadium.

“Knocking down the stadium is bittersweet to me,” she said. “There are many wonderful memories I recall that reflect my childhood, and the reason we are the W.S. Neal Blue Eagles. Coach Fountain was the second coach to have an undefeated regular season in 1996, which followed after Coach David Salter’s undefeated season in 1971. The stadium was built with old bricks from the school that burnt down in 1951. My senior year after we beat Miller we all went back to the Buddy Taylor Stadium where our tradition all began. There were many fans there to greet the football players, cheerleaders, band members, and coaches. And it wasn’t that we beat Miller, it was about how our community, East Brewton stuck together to support their team through thick and thin.”

“They came from the old high school that burned down and were used to build that stadium,” Peebles said. “That was in the 50s. The 70s were great. How I miss those good people and those great days. What a place … it will be missed.”

Elizabeth Nichols Owens said seeing the old stadium being turned down is sad.

“Lots of memories there,” Owens said. “Loved watching the football games especially when we beat Miller.”

Players recall their days of glory in the old stadium.

“That stadium was where I played my first football game ever,” Fred Lamar Rankin said. “Scored my first touchdown in the junior varsity, as well as my last touchdown ever.”

While the stadium is gone, Dunaway said its memories will remain.

“That old stadium has help to teach plenty of young boys discipline, sportsmanship, and character,” Dunaway said. “I know in my heart as well as many others that Buddy Taylor Stadium had to go, but we can always recall that play, that touchdown, that tackle, and wins and losses on that old field.”