Bonner: Healthcare a ‘challenge’ at best 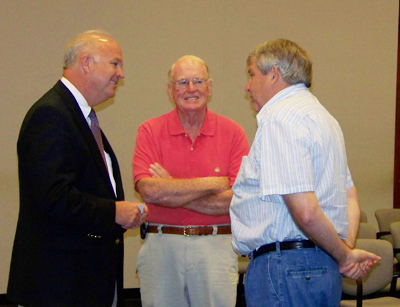 With topics including everything from the economy and joblessness to religion, U.S. Rep. Jo Bonner lead a town hall meeting in Brewton Wednesday.

During the meeting Bonner, R-Mobile, encouraged citizens to become involved in their government.

“People need to stand up and be heard,” Bonner said. “We have added two links to our Web site that give the people a chance to be heard.”

Bonner said the ideas generated at America Speaking Out and You Cut are taken seriously by lawmakers around the country.

“We take those comments and ideas seriously,” Bonner said. “We want to hear from the people when making decisions on issues important to you.”

Bonner also addressed the issue of health care reform calling it a “challenge” at best.

“The health care reform passed without my vote,” Bonner said. “How can we do a better job of making healthcare available to more people? How are we going to pay for that? Taxes will be increased. A host of new taxes will be added. There will be cuts to Medicare.”

Bonner said the idea of health care reform may sound good, but his concern is that government will be more involved in the medical well-being of Americans.

“It sounds great that 450,000 new people will be on Medicaid through this reform,” Bonner said. “My worry is that more government will be put between you and your doctor. It is going to be a real challenge to make health reform work.”

The Rev. John Mathieu suggested to Bonner that putting faith back into government would help ensure freedoms currently enjoyed in America.

“The very basis of the freedoms we have is the Christian faith,” Mathieu said. “The exclusion of Jesus Christ is growing. If we don’t bring our faith into the marketplace and into the public sphere we will lose our freedoms.”

Bonner agreed saying that the country has lost some of the ideals of our founding fathers.

“We’ve gone to such an extreme tilt to the left that we’ve lost that,” Bonner said. “It put a dagger through my heart to read the words of Lynn Smith when he addressed students at T.R. Miller High School. When he said he was breaking state and federal laws to lead the students in prayer following the tragedy experienced by this town. It is awful to be afraid to suggest prayer at a time when prayer was needed most. We should be concerted about this as a nation.”

Bonner encouraged citizens to speak out on issues that are important to them. He said one way to do so is to vote in every election.

“The voices of one will never be as powerful as the voices of many,” Bonner said. “We need to be more vocal and one way to do it is at the ballot box. The way to make change is in a free election.”

Bonner said recent elections have seen low voter turnout taking some of the power from the people.

“Sadly, only 24 percent of Alabama’s registered voters took the time to vote in the last election,” Bonner said. “People need to take their country back. I am more concerned than I’ve ever been. The American promise isn’t always guaranteed. To gain more ownership we must stand up for what we believe in. One tragedy is that only 24 percent of voters voted in this state. The greater tragedy is there are those who go in and vote for people they don’t know anything about.”

Bonner serves the first congressional district, which includes Escambia, Baldwin, Mobile, Monroe and Washington Counties as well as a portion of Clarke County.