For the fourth year in a row, the W.S. Neal Lady Eagle basketball team will have a new coach.

“The reason I am at W.S. Neal is very simple,” Saxon said. “The Lord closed the door at ECHS and opened up this one at WSN.  Although I was very successful at ECHS in my coaching and in the classroom, I know without a doubt that He has something exciting for me here at WSN.”

Saxon, who has seen many jobs and stops in his journeys changed careers in 2001 from engineering management to education with a passion to coach and teach.

“I knew that WSN has a reputation of being a good school and I knew that I could contribute to that goodness,” Saxon said. “My expectations for the WSN Lady Blue Eagles is to have them excel and perform to their very best in every athletic contest and at the same time lead and guide them to do the same in academics.

“At this time I have not scheduled tryouts because I am in the process of relocating to the Brewton area, but I plan to hold tryouts in a couple of weeks.”

As for being named head coach at a program that has seen many changes in recent years?

“Sometimes it takes many changes to find the right fit,” Saxon said. “My prayers are for the team, school and community that they have found a fit.”

He played for Ralph ‘Shug’ Jordan at the Auburn University in 1970.

He has held a head football coaching position, asst. football coach at nine high schools and two major universities, three of which competed for Class A and 2A state titles.

Saxon has also written and published a book on “How to Get an Athletic Scholarship” also was nominated for Coach of the Year in the 2007-08 season. 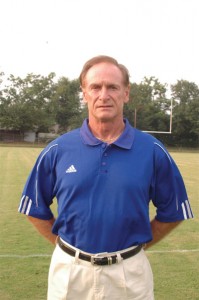