The T.R. Miller Tiger football team will begin their 2010 regular season with a trek south on U.S. 31 to take on the Blue Devils of Escambia County High School in Atmore.

Tiger head coach Jamie Riggs said his team has had some ups in downs in preparing for the season opener Friday.

“I don’t know that we are a whole lot better,” Riggs said. “We do have one injury in particular as Shan Fleming has broke his ankle. He will be out the first half of the season. Right now, we have made a little progress in some things, but not as much as I would have liked, and now it is time to get ready for Atmore.”

Riggs said he thinks his team is just a little bored right now and they are just ready to play.

“We are kind of at this point where I don’t think we will get any better until we play someone,” Riggs said. “We just have to get prepared for the game and go on.”

The game Friday night between the Tigers and the Blue Devils will be a non-region game.

The Blue devils are under new head coach Mark Heaton who comes to Atmore from J.U. Blacksher in Uriah.

“I watched them play in the spring and I watched them play in their preseason game and I was very impressed,” Riggs said. “I thought they were a well-coached team and very physical. They are outstanding particularly on defense. They are a really tough group that we have faced before. They have size and speed and no body has thrown the ball on them much and run the ball on them much. So, we have a great challenge in front of us to deal with them. They are just a good football team.”

“They have the Stallworth (Rico) kid (No. 6) back for his fourth year as starting quarterback,” Riggs said. “They have (No. 4) Neikko Williams back and tailback and he is super quick. It just scares you to death every time he touches the ball. They have a big fullback that runs the ball and they are a little more in the I-formation now as well as the shotgun stuff. So they have become a physical running team and that always concerns you. To me, they really look like a good, quality football team.”

Although every game is important to win, Riggs said winning your first game is always very important.

“You would always like to set the tone for the season,” Riggs said. “I always had a coach that told me that if you win the first one, it always helps. We also know that when you schedule someone like Atmore, it is always going to be a challenge. We know they are always going to be good. Especially when we go play down there, so we know that. It is not a surprise by any means. What you would like to come out of this is some potential. Obviously you would like to win, but you at least need to come out of this game with some potential for the season. You need to come out thinking that you can block some, run the ball, play a little run defense and maybe you will find a guy that plays better than you thought he would. Hopefully some of that will happen.”

While a win to start the 2010 season will be good for the Tigers, the win will put T.R. Miller, as a football program, with their 600th win overall which tops the state regardless of classification.

“Overall, I know when they have done all the lists, we are at the top of the list,” Riggs said. “I think that just says something about the effort that has been put forth by all the players and teams here. Football here is a good thing. It just says something about the players we have had. We have some consistency down through the years and that is hard to maintain this day in time. They cannot even do that in college football and they go out and pick their players. So it is very, very difficult to do so. I certainly think that people around here can take a little pride in—that we have had that type of consistency.”

Riggs said a lot of people will have a good team here and there, but to consistently have winning and successful teams, then that hopefully says something about the people involved in it.

As for the Atmore game Friday, Riggs is hoping for a good crowd.

Game time is set for 7 p.m. at Herbert Barnes Stadium in Atmore. 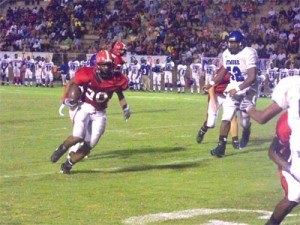 Adam Robinson | The Brewton Standard T.R. Miller Tiger running back Anthony Herbert runs the ball at home against Atmore last year. The Tigers and Blue Devils will tangle in Atmore Friday at 7 p.m.