For the W.S. Neal Eagle football team Thursday night in a preseason game against Opp in East Brewton, the story line for the game was a tale of two different halves.

After allowing the B-team to play the first quarter and a half, the varsity teams played the final eight minutes of the second quarter and the whole second half.

In the eight minutes played in the first half, the varsity Eagles had a total of 74 yards of offense (-3 rushing, 77 passing and three first downs) while trailing 8-6 as Opp scored right before halftime.

In the second half, the Eagles only managed 86 total yards (75 in air and 11 rushing) with five first downs while being outscored 19-8. Before the 90-yard scoring drive near the end of the game, the Eagles had -4 yards of offense (-10 rushing, 6 passing) and no first downs.

“For the most part, I thought our kids played hard,” W.S. Neal Eagle head football coach Kevin Jordan said. “Assignment-wise, we did not play very well. The effort was there, but we did not match up with our assignments too good Thursday night and it should in the second half. I thought we played well early and then after that it went downhill about midway through the third quarter. Again, for the most part, we played hard. We just have to get some mistakes corrected.”

Jordan said they had a lot of players who are older kids, but they have not played in a long time.

“We were expecting some missed assignments,” Jordan said. “That is our responsibility and we have to get that fixed.”

All that being said, those mistakes need to be fixed for the season opener for the Eagles Thursday night in Flomaton for their first game of the 2010 season.

Jordan said the first thing he sees with Flomaton is they are big upfront.

“They have a couple of 300 pound linemen on the offensive line,” Jordan said. “They have a good size tight end and some really good speed at the skill positions. Their running back, No. 10, (Neiko) Robinson can really go. He is fast. So they are going to present a very big challenge for us with their size and speed on offense.”

“They kind of get after you defensively,” Jordan said. “So it will be a big challenge for us. We are definitely looking forward to it. I really have not seen much on the special teams for them and their kicking game in their jamboree.”

Jordan said getting an opening season win Thursday night for his Eagle team will be very important due to their records the past couple of years.

“We are coming off two sub-par years and we need something to happen good for us confidence-wise to get things back rolling,” Jordan said. “What we are trying to teach our kids is that you have to make that happen. You just don’t win a ballgame and get your confidence up. You have to go out and take it in and win it yourself. That is something that we are battling right now. This group right here has not had a whole lot of success. We are trying to change that mentality and show them that you have to go out and win the game instead of waiting on something good to happen or on the flip side, waiting on something bad to happen and I think that is what is happening right now.”

Jordan said he and his coaches are trying to tell their players that last year, and two years ago, has nothing to do with this year.

“Mentality-wise, you always want to remember that bad taste in your mouth,” Jordan said. “Especially for the kids who have played the last couple of years. So I think a win for us will be very important to set the tone for the season. It is a game that we really need to go out and compete well in to have a chance to win.”

Jordan said his team is excited to play a county rival that is close.

“We are renewing a county rivalry and with them being right next to us, a lot of the kids and parents know each other,” Jordan said. “We are excited about that and we think it will be good for both programs and both communities and hopefully we will give them a good game to go out and watch.”

Game time is set for 7 p.m. Thursday in Flomaton. 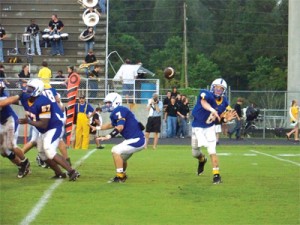