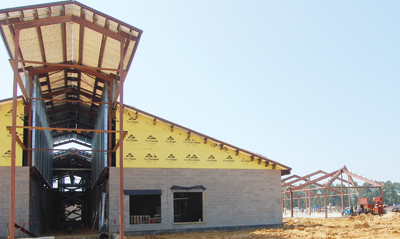 Nearly hidden from view by motorists on U.S. 31, the new Brewton Middle School is rising from a hill on nearly 100 acres, taking shape a year before it is scheduled to welcome students.

The current school building was erected in 1957 as the new Booker T. Washington School, before integration turned it into Brewton Middle School.

The building will also have a double gym — one for physical education classes and a competition gym with bleachers for basketball games and concerts.

On the grounds, there will also be a football practice field and track.

Superintendent Lynn Smith said he believes the building is on track for opening at the start of the 2011-2012 school year.

“They just got the last concrete slab down,” he said. “As soon as they can get the last part of the roof on, we will get a better idea of they are on target.”

Once the roof is up, weather won’t be a hindrance for the workers. Prater said he hopes brick work will begin soon on the fifth- and sixth-grade wing.

Finding the location of the school presented some challenges for the school board initially. The first choice was to use part of the Dogwood Hills golf course, but the city declined to sell any of that property. Instead, the school board and city were able to work out a deal on the 100 acres at the corner of U.S. 31 and Old Castleberry Road.

The entrance to the school will be off Old Castleberry Road, and the state Department of Transportation will be working on turn lanes for both streets soon.

With the city’s growth trending north on U.S. 31, Smith said he believes the new location of the school will make more sense in coming years. And the space on the property allows room for growth, as well.

“The school board in years to come will have some options,” Smith said.

Prater said he believes the new building will be more than just a shiny new space for students and teachers.

“I think pride and motivation are intrinsic,” Prater said. “But I just know that the enthusiasm and pride that comes from moving into a new building will improve behavior, attitudes and motivation.”