The 2010 Punt, Pass, and Kick was held Saturday in Brewton at T.R. Miller with 26 area kids participating in the event.

NFL Punt, Pass, and Kick is a national skills competition for boys and girls between the ages of 6 and 15 with boys and girls compete separately against their peers.

Each participant is allowed one punt, one pass and one placekick as part of his or her competition. Scores are based on both distance and accuracy. For example, if a participant passes the ball 100 feet, but the ball lands 30 feet to the right of the measuring tape, the final score is calculated by deducting 30 from 100, for a final score of 70. Scores are based on exact feet and inches (partial inches are rounded to nearest inch). Participants cannot receive a negative score, but they can receive a score of zero. A participant’s final score is his or her cumulative total for the three individual events. For example, if the participant scores 40 for punting, 60 for passing and 22 for kicking, the participant’s final score would be 122.

Locally Saturday, Kyle Blevins took first in the 6-7 age group with a score of 87-9 followed by Turner Smith and Nolan Atkinson.

In the 8-9 group, Logan Bush placed first with a score of 129-6 followed by Joseph McDonald and Landon Sims.

Hayley Thompson took first in the girls with a score of 77-6 and Ella Hart claimed second.

In the 14-15 group, Chandler Brown placed first with a score of 285 followed by Chris Jones and Jones Manning. 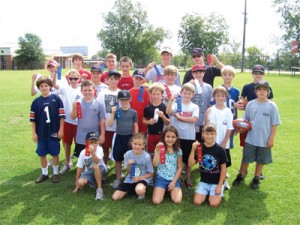 The 2010 PPK contestants and winners Saturday in Brewton.