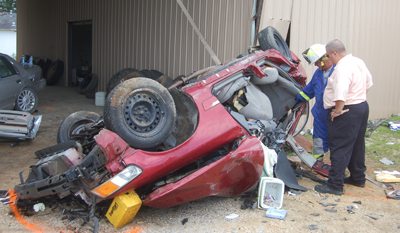 Two people were killed and two others injured in a wreck at highway 113 and U.S. 31 in Flomaton.

According to witnesses, it appeared that a silver sedan crossed the intersection and hit the side of a red sedan.

Both cars wound up in an 18-wheeler bay at Rowland Tires as a result of the force of the crash.

A man and young boy about 12 years old were killed, authorities said.

Two people were LifeFlighted from the scene.

The names of the people involved in the wreck have not been released.