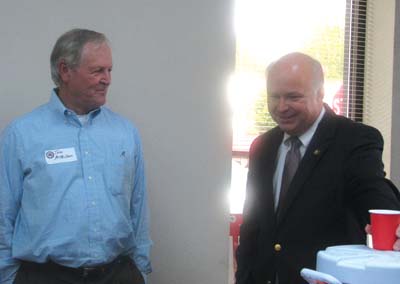 U.S. Rep. Jo Bonner was the special guest at the grand opening of the Escambia County Republican party’s election headquarters in Brewton Thursday.

“We have to stay positive, but we don’t want to wake up the morning after the election and find that newspaper headlines reads ‘Republicans Almost Win, But it Was Not Quite Close Enough.”

County party chairman Jeff Peacock welcomed both candidates and visitors to the headquarters and told them that this is the first GOP headquarters located here since 1988.

“We have some good candidates for this next election,” Peacock said. “We have a good chance to make some changes and we should be able to win several of the elections this year.”

The new party headquarters will be staffed but the party is also seeking volunteers.