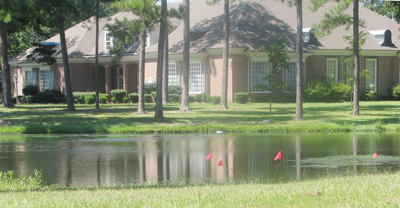 A cool breeze and a bobbing cork keep community residents coming back to the campus of Jefferson Davis Community College’s pond. The look of the popular fishing spot will begin to change when funds from a grant are put to use.

Fisher of Men director Alan Couch said a $5,000 grant awarded to the group will help make the pond a better place to fish for years to come.

“We received this grant from Gulf Coast RC&D last year,” Couch said. “We need to move forward with the work and have finally gotten things in order to make some much needed changes at the pond. The only drawback is that the pond will have to be closed to the public for about two years.”

JDCC President Susan McBride said she is glad to see a plan in place to improve the condition of the pond, which the community uses for fishing and feeding the ducks.

““The college will gain with a pond that is in better shape and the community will have a better place to visit,” she said.

Couch said the cooperation of officials at JDCC has been essential for making the work possible.

“Without the participation and cooperation of JDCC we would never have gotten this grant,” Couch said. “We are really excited about seeing the planned changes make a difference.”

McBride said the Fishers of Men organization applied for and followed through on getting the grant.

“The group took it upon themselves to apply for this grant that will make the improvements possible,” McBride said.

Problems with the pond over the past several years have caused the annual fishing event sponsored by the group to be less than hoped for.

“We have had a problem with the pond getting out of balance over the past several years,” Couch said. “One end is deeper than the other, so naturally the fish gather in the deeper waters. That makes for a little less fishing action on one end of the pond. When you have a large crowd of people fishing on our event day some people who fish on the shallower end of the pond might not see quite as much fishing action.”

The proposed changes in the pond will make the fishing experiences of everyone better and more balanced, Couch said.

“The planned work will include dredging the entire pond to create a balanced floor,” Couch said. “The pond will be 10 feet deep all the way across. There will also be a two to four foot edge around the pond which will create are more level playing field when it comes to fishing.”

Couch said the work will take a bit of time to complete which means the annual fishing event will have to be cancelled this year.

“We usually have our fishing rodeo in October for children and seniors to come out and fish,” Couch said. “With the work being done on the pond we are going to cancel that event just for this year.”

Couch said even when work is completed it will still take some time to get the pond back into good enough condition to grow fish.

“There is no spring that feeds the pond so that creates a little problem,” Couch said. “Once the work on the pond is finished it will have to be refilled with water. That will probably have to come from fire hydrants and that water is chlorinated.”

Couch said the chlorine will have to evaporate from the water before some varieties of fish can live there.

“That means that even for next year’s fishing rodeo catfish will be the only kind of fish available for catching,” Couch said. “There will be bream and bass in the pond, but they will need to spawn a couple of times to be ready for catching.”

Couch said the grant funds will get the best return due in part to the help of Ryan Pitts.

“Ryan has really be good to help us with getting this work planned and going,” Couch said. “His help and generosity have made this possible for us.”