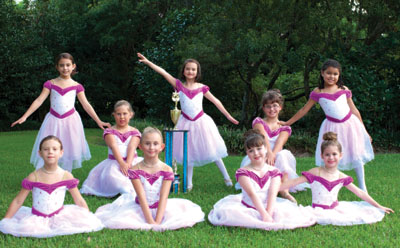 Both teams received top honors at the regional competition held in Mobile and advanced to the national championship competition.

Ann Peevy, director at Brewton Dance Studio, said the teams performed well at regional and national competitions with one team receiving an audience honor at the end of their competition routine at the regional level.

“Team two performed a ballet routine to ‘Can I Have This Dance’ during the regional competition,” Peevy said. “Their fathers joined them on stage for the number and they received a standing ovation for their performance.”

While in Mobile, team one performed a ballet team to “The Climb,” and earned a top first place trophy and an invitation to compete at the national level.

Dancer Aaliyah Bedsole said she has been dancing for a while and enjoys every aspect of dancing.

“I’ve been dancing since I was 3,” Bedsole said. “It seemed like it would be really fun and I like all kinds of dancing including ballet, baton, jazz, tap and team dancing.”

The rehearsals also kept the team members busy. Payton Barnes said some practice sessions were held outside the dance studio.

“We practiced a lot,” Barnes said. “We practiced on the road out front and in the parking lot of Burger King.”

“Our daddy’s came on and danced with us,” Peters said. “They picked us up and turned us round and put us on their shoulders.”

Ella Hart agreed the routine was one that the judges seemed to enjoy.

At the national competition dancers were judged by a panel of judges who made determinations on the top teams.

“The panel of judges were made up of seven professional judges from across the United States,” Peevy said. “I am very proud of our dance teams and we had a great competition year.”