Fall Saturdays are big across the nation with college football hysteria sweeping from coast to coast and region to region.

Last Saturday was bigger than most with several marquee match ups taking place including several games pitting teams that played against on another for national championships.

The University of Miami took on Ohio State, Florida State made the trip to Norman, Okla. to take on the Oklahoma Sooners, but the most intriguing game to most was the Penn State Nittany Lions traveling to Tuscaloosa to face the No. 1-ranked Alabama Crimson Tide.

The game between Alabama and Penn State was especially big for one family who have present and past history with the two teams.

Atmore native and former Crimson Tide player Don McNeal was on hand at the game Saturday to see his alma mater and his nephew face off at Bryant-Denny Stadium.

McNeal’s nephew, true freshman Robert Bolden, is the starting quarterback for the Nittany Lions, which makes him the first freshman to start at that position under head coach Joe Paterno.

McNeal said he enjoyed seeing his nephew take on his Crimson Tide, and added despite the 24-3 loss, he put on a good performance.

“It was really great,” McNeal said. “It was great to see Robert play against Alabama. He lost, but he played really well.”

In only his second start, Bolden completed 13-of-29 passes for 144 yards and two interceptions against a strong Tide defense. For the season, Bolden has thrown for 383 yards with two touchdowns and three interceptions and a completion rate of 57 percent.

Although his nephew was on the field Saturday, McNeal’s loyalties did not change.

The former first-team All-American said he was rooting for his alma mater, but wanted Bolden to do well.

“My loyalties were no doubt with Alabama,” McNeal said. “I wanted Rob to have a good game, I wanted Alabama to win, and that’s what happened.”

With Alabama and Penn State on the field Saturday, the game also renewed a rivalry (the two teams played each other every season from 1981-90) and brought back some fond memories for McNeal.

It was over Penn State that McNeal and the 1979 Crimson Tide defeated Penn State for the national championship 14-7 at the Sugar Bowl in New Orleans.

That game is recalled in college football history for the “Goal Line Stand” due to Alabama’s defense repeatedly stopping Penn State short of the end zone to prevent them from tying the game.

McNeal had a huge moment in the game when he stopped Penn State receiver Scott Fitzkee from getting in the end zone with a huge hit that sent him backwards.

Two plays later and another big stop by Crimson Tide linebacker Barry Krauss and Alabama had their sixth championship under Paul “Bear” Bryant.

McNeal said seeing the two teams play on Saturday brought back all of those memories.

“Watching Alabama and Penn State play definitely brought back memories of us and the goal line stand,” McNeal said. “I made a big play to stop them from getting in on second down and then Barry Krauss made that huge play to stop them on fourth. It really brought it all back seeing them on the field Saturday.”

Now with this year’s game in the past, it seems McNeal and his nephew have more memories and some common ground they can look back on the future. 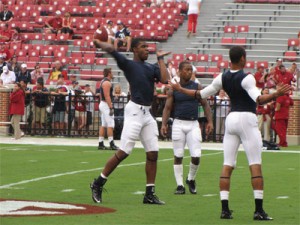