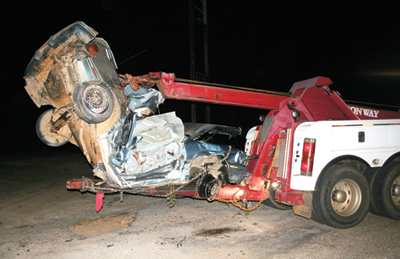 An Andalusia man escaped life-threatening injuries Thursday evening when his car crashed through a bridge spanning the Conecuh River on U.S. 41 in the Riverview community.

Alabama State Troopers said James Leon Peavy, 45, of Andalusia, was involved in a single-vehicle accident reported at 6:25 p.m. Thursday. Emergency and cleanup crews remained on the scene for several hours.

He was charged with driving under the influence, Trooper John Reese said.

“We were the first on the scene of the accident,” Brazil said. “Since the accident was out of our jurisdiction we secured the scene and turned command over to Escambia County Sheriff’s and Alabama State Trooper officials.”