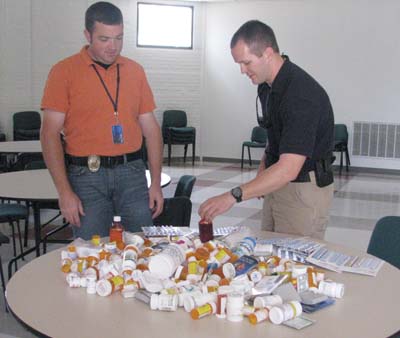 Brewton Police officers stood guard over a pile of drugs Saturday during a collection of drugs at the Brewton Civic Center.

Sgt. Bryan Davis, commander of the Brewton Police Department’s Narcotics Division, said the event was held through the cooperation of the Alabama Drug Enforcement Agency.

“The whole idea is to get unused drugs out of homes and off the streets,” Davis said. “We are happy to have been a part of this project and were pleased with the number of items turned in.”

Davis said only a handful of residents dropped off items during the four-hour event on Saturday.

“We didn’t have a lot of people bring in items to the drop off, but we are thankful for everyone who did make a drop off,” Davis said. “Every pill that we took in is one that won’t be on the streets or accidentally taken in homes in our area.”

Cpl. Andrew Casey assisted Davis with the collection and said he was glad to see the items turned in, as well.

“These are things that won’t end up flushed down the drain and end up in our water system,” Casey said. “It’s great when you can get people to bring these things in so that they can be disposed of properly.”

Davis said the collection brought in around 20 pounds of prescription and over-the-counter medications. Drugs ranging in strength from aspirin, vitamins and cough drops to Lortab and nitroglycerin were included in the collection.

Anyone with drugs that need to be disposed of may contact the Brewton Police Department at 867-3212.