One injured, restaurant damaged in wreck 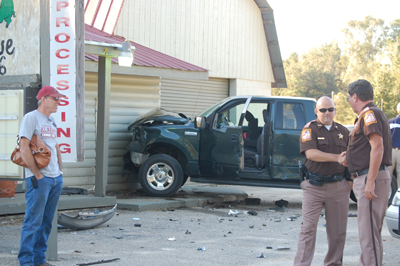 One person received minor injuries in an accident that left the side of the old Camp 31 Barbecue restaurant damaged Tuesday afternoon.

Officials with the Appleton Volunteer Fire Department, who responded to the accident, said only minor injuries were reported by the female driver involved in the incident.

“Witnesses told us that the lady had pulled out from Old Castleberry Road and was trying to go across the road,” Ginny Tyler, Appleton VFD member, said. “She said she looked but didn’t see the truck coming. Then all of a sudden, there it was.”

Tyler said it appeared that both drivers tried to avoid a collision which sent one vehicle into the side of the building were the accident occurred.

“The driver of the truck was not injured in the wreck,” Tyler said. “The impact did do some pretty good damage to the front of his truck and to the building. But, everyone seemed alright.”

No other injuries were reported in the incident.