The only score of the game came on T.R. Miller’s first offensive possession of the game as they used a nine-play drive to go 65 yards as Keion Smith tossed a 10-yard touchdown pass to Caleb Hubbard on fourth down to give T.R. Miller a 6-0 lead with 2:39 left in the first quarter.

After four straight possessions of four-and-outs for both teams, T.R. Miller got the ball from W.S. Neal with 3:28 left before half after a fumble and went eight plays to set up first and goal from the Eagles 2-yard line.

T.R. Miller got to the 1-yard line and on a third down play, got in the end zone, but after a lengthy discussion by the referees, the play had an inadvertent whistle and another play was ran with no time on the clock.

With tempers flaring from both sidelines, T.R. Miller fumbled the snap on the next play and failed to score, but lead 6-0 at the half.

In the second half, W.S. Neal started the third quarter on a 12-play drive but turned the ball over with 1:04 left in the quarter.

Both teams then alternated possessions after four downs and turnovers with the latest turnover coming against W.S. Neal as they were trying to tie the game and win as T.R. Miller picked off a pass and ran the clock out for the win.

Dominique Jackson led T.R. Miller and the game rushing as he had 63 yards on 15 carries.

Smith was 2-for-4 passing with 37 yards and one touchdown and Ryan Hunt led receiving with one catch for 27 yards.

For W.S. Neal, Damion Williams led rushing with 48 yards on nine carries. Cam Blackman was 2-for-13 passing for 29 yards and one interception.

Josiah Nettles had one catch for W.S. Neal for 30 yards in the loss.

T.R. Miller will take on Opp next week at home for their final game of the 2010 season. The two teams tied earlier in the year.

W.S. Neal will play Atmore next week at home with the game time also set for 6:30 p.m. 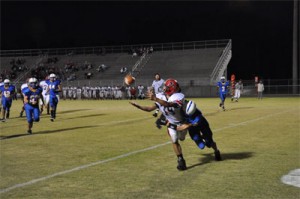