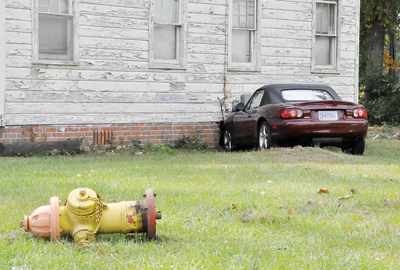 If anyone was home at 821 Douglas Ave. on Tuesday, she might have had a big surprise when a 2003 Mazda Miata was propelled into the side of the house.

Brewton Police Sgt. Matt Jernigan said the accident happened when the Miata, driven by Will Steverson of Brewton, failed to yield the right of way on Douglas Avenue, as he traveled west on Underwood Street.

“The Miata ran in front of a 1990 Dodge Omni which was traveling south,” said Jernigan. “The Dodge was driven by Jamie Chavers, and she struck the passenger side of Steverson’s car, causing it to leave the street and hit the house.

“At this point it doesn’t seem as if alcohol was involved, but it is possible that narcotics were. We administered a sobriety test on Chavers and she was transported to D.W. McMillan Memorial Hospital, where she refused treatment.”

Steverson was also transported to the hospital, but Jernigan said he was not sure about any injuries.

He is still working the case and it is still under investigation.