By PAUL BEAUDRY/For the ASWA

After losing the first two games of the season, T.R. Miller found itself in an odd spot – struggling.

But the Tigers turned the corner and won six of their next seven to keep a playoff qualifying streak alive that dates back to 1984.

Running back Anthony Herbert showed part of why the Tigers have kicked things into a new gear on Friday night in a performance that earned him the Alabama Sports Writers Association Offensive Player of the Week.

His performance beat out two other finalists as chosen by an ASWA committee in Jonathan Redd of Mobile Christian and Alonzo Harris of Gadsden City.

Redd led Mobile Christian to its first playoff berth since 2007 by going 14 of 24 passing for 405 yards. While he had three interceptions, he threw for TD passes of 35 and 48 yards and ran for 5 and 2-yard scores in a 42-10 win over Cottage Hill. Harris rushed for 231 yards and three touchdowns on 28 carries in the Titans’ region-clinching 28-21 win over Hewitt-Trussville Two of his scores came in the last eight minutes of the fourth quarter during a 14-point comeback.

The ASWA Defensive/Special Teams Player of the Week is Gabe Richards of Wicksburg. While the Panthers lost to Barbour County, 34-27, Richards had 12 tackles, four sacks, blocked a punt, forced a fumble and broke up a pass.

The two defensive finalists were Dax Gillespie of Hartselle and Tyler Hayes of Thomasville. Gillespie caused a fumble of a Cullman drive, then recovered it in the end zone for a touchback during Hartselle’s 30-27 win over the Bearcats, and intercepted a pass in the end zone. Hayes excelled beyond numbers on both sides of the ball in Class 4A No. 2 Thomasville’s 35-7 win over No. 1 Jackson as he punted for a 38.3-yard average, had six tackles, rushed for 66 yards on seven carries and caught two TD passes.

Kyle Caldwell, Dadeville: Completed 19-of-22 passes for 270 yards and five touchdowns to help Dadveille win Class 4A-Region 3 with a 44-34 victory against Beauregard.

Trey Cochran-Gill, Tallassee: Completed 21-of-25 passes for 317 yards and two scores in Tallassee’s 28-23 win against Valley.

Daven Dixon, Hillcrest-Evergreen: Rushed for 242 yards and three touchdowns in a 44-27 win over Alabama Christian.

Blake Fuller, Pell City: Had 10 catches for 281 yards and two touchdowns against Austin.

Lorenzo Gray, Pinson Valley: Gray had just 14 carries against Shelby County and rushed for 267 yards and touchdown runs of 67, 2 and a game-winner for 79 yards.

Chris Green, New Brockton: Rushed for 208 yards and three touchdowns on 16 carries, completed 5-of-8 passes for 91 yards with a touchdown and had 15 tackles on defense with a sack and had an interception in the Gamecocks’ 24-12 win over Samson.

Rocky Hayes, Cleburne County: Broke his own school all-purpose record after a week, accounting for 365 yards and three scores, two over 90 yards, as the Tigers defeated Oneonta 39-34.

John Slayton, St. James: With his team trailing 14-0 in the second quarter, the running back responded by rushing for 157 yards and scoring five touchdowns in a 52-28 win over Bullock County.

Ardarius Stewart, Fultondale: Was 12 of 16 passing for 215 yards and a TD, while rushing 20 times for 241 yards and five TDs in a win over Victory Christian.

Jahwon Williams, Headland: Completed 16-of-23 for 284 yards passing and three touchdowns while rushing for 55 yards rushing and a touchdown in the Rams’ 41-26 loss to Andalusia.

Jameis Winston, Hueytown: Had 329 yards in total offense in a win over Wenonah, completing 22 of 32 passing for 313 yards and three touchdowns.

Josh Appleby, East Limestone: Kicked a 29-yard field goal with three seconds left to give the Indians an upset victory over Athens.

Damien Dickinson, McIntosh: Had 15 tackles, a sack, blocked a punt and forced a fumble in 47-0 loss to Sweet Water.

Harrison Lewis, Thomasville: Had field goals of 38 and 41 yards, and three extra points in a win over Jackson.

Ryan Mason, Pleasant Grove: Had 14 tackles with two for loss against Parker.

Kamryn Melton, Dothan: Returned a kickoff 80 yards for a touchdown and had a 70-punt return set up another score, helping the Tigers pull away from city rival Northview 58-14.

Chris Rabb, Hueytown: Had 13 tackles, four tackles for loss and 2.5 sacks in a win over Woodlawn.

Jeffrey Scott, Bullock County: Returned a punt 71 yards for a touchdown and a kickoff 85 yards for a score in a 52-28 loss to St. James.

Tyler Wellington, Fyffe: Finished with 17 tackles, including one for a loss, as Fyffe edged Sand Rock 20-7. 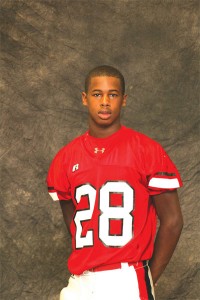