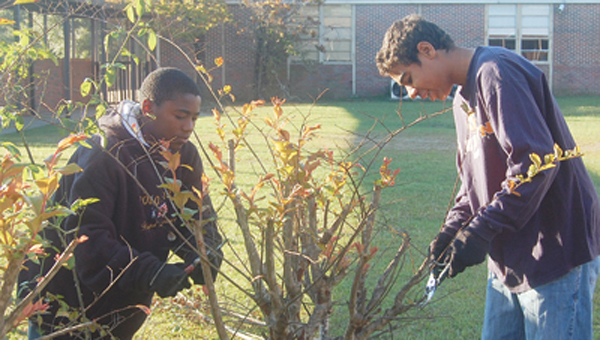 Teachers and students at Brewton Middle School had a surprise waiting for them Monday morning.

About 50 volunteers gathered at the school for several hours Saturday to help clean up at the school, trimming hedges, pulling weeds and sprucing up the grounds. The volunteers were part of a group hoping to turn the middle school into a community center once it is vacated by the city school system and also included RSVP volunteers.

Brewton Middle School Principal Doug Prater said students and faculty have noticed how much work the volunteers did on Saturday.

“It looks great,” he said. “We’re appreciative and thankful. We still have a lot of pride here.”

The committee working on the community center has partnered with the Coalition for a Healthier Escambia County, which has secured some grant funding for the project. The city has also set aside $100,000 for the community center, but city officials have said they need to make sure that certain legal requirements are met before they can approve such a move.

The school building itself will be returned to the city’s hands once the school district leaves the facility next year.

Brewton City Councilman Joe Watson said he was pleased with the turnout at the cleanup. Organizers said they hoped the cleanup would show how dedicated the volunteers are to the community center project — and that it would inspire others to support the idea.

“People are going to care about this building,” Watson said.