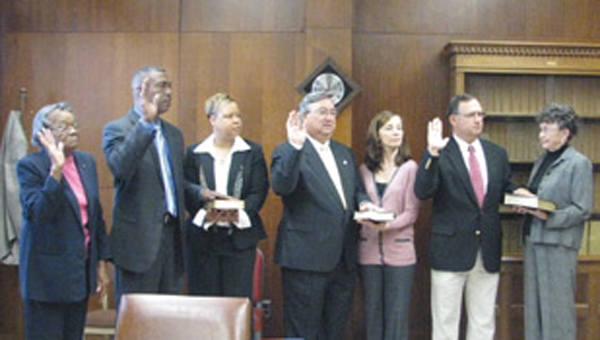 A brief ceremony began the regular meeting of the Escambia County Commission Wednesday morning as commissioners were sworn in for the next four-year term.
Commissioners elected or re-elected in their respective districts took the oat of office administered by Judge Dave Jordan.
David Quarker was sworn in for his first time in office representing Distirct 5. Quarker defeated challenger Don Ellestad in last week’s election.
Larry White, commissioner for District 3, defeated C.E. “Buster” Crapps in his bid for re-election to the seat.
Commissioner David Stokes, representing District 1, was unopposed in the election.
Both White and Stokes also took the oath of office during Wednesday’s ceremony.

Teachers and students at Brewton Middle School had a surprise waiting for them Monday morning. About 50 volunteers gathered at... read more